Wendy Korver is the Dr. wife of Zoo owner and animal trainer Michael Hackenberger. Her husband is causing major internet backlash. In a year that saw Cecil the Lion killed in Africa by Minneapolis dentist Walter James Palmer, Hackenberger has joined the list of the most hated people by PETA and the world!

According to TMZ, the animal trainer was caught on camera whipping a tiger several times until it cowers on its back during a training session.

Michael Hackenberger has provided animals for a variety of productions in Hollywood. Including the “Life of Pi.” He runs the Bowmanville Zoo in Ontario, Canada. Other Hollywood credits include “George of the Jungle.”

According to the website, the Bowmanville Zoo, founded in 1919, is the oldest private zoo in North America. It is home to hundreds of animals who live on 55 picturesque acres in the heart of Bowmanville, Ontario, about 1 hour east of Toronto.

The page lets readers know the hundreds of exotic animals like giraffes and lions, horses and turtles, are loved and cared for every day by the dedicated professionals who work at the zoo!

Many of the Bowmanville Zoo animals are famous, having been featured in a number of movies. The webiste also claims, the animals get the best veterinary care possible.

Michael Hackenberger is married to Wendy Korver. Korver. She is a veterinarian.

Dr. Wendy Korver owns the Bowmanville Veterinary Clinic, which provides veterinary care to all the zoo animals. Dr. Korver’s practice was voted Clinic of the Year (in all of Canada), by the Ontario Association of Veterinary Technicians. It has also won the Clarington Readers Choice Award for Best Clinic seven years in a row (2006 through 2012). 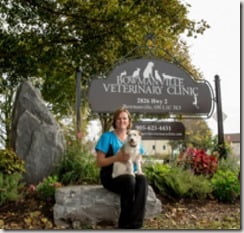 It is not the first time Wendy Korver’s husband has been accused of such acts. Last August, Hackenberger muttered some expletives at his mini-horse riding baboon Austin after the primate didn’t follow his “script” during a live television show. He later apologized.