Wendi Deng, formerly Murdoch is said to be back in the dating scene, and let;s just say her standards are pretty high. According to Us Weekly reports, Deng, who was previously married to a powerful man, has done it again. She is said to be in a serious relationship with none other than, Russians president, Vladimir Putin!

According to the magazine, she was pictured on Roman Abramovich’s $400 million mega-yacht. Roman is said to be close friends with Putin. However, the pair have yet to be spotted together or addressed the rumors.

Wendi was born Deng Wenge December 8, 1968 in Jinan, Shandong, People’s Republic of China. Her engineer parents had four children, three girls and one boy, Wendi being the third. She was into sports focusing on volleyball as her major interest. She attended Xuzhou First Secondary School and Xuzhou No. 1 Middle School.

Wendi landed in US soil, thanks to an American couple who sponsored her visa. She enrolled in California State University leaving her medical studies behind.

Deng is fluent in Mandarin and English and holds an MBA from Yale University’s School of Management and a Bachelor of Arts degree in Economics from California State University.

Following her graduation, starts align for Wendi who then landed an internship at News Corp subsidiary Star TV in Hong Kong. She eventually became the VP, as a Vice President she lead the way in forming business links with China for high-speed video and internet access. 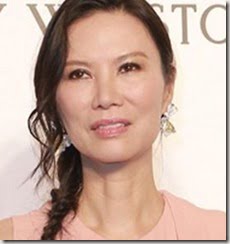 Wendi is the  co-CEO of Big Feet Productions, a film production company launched in 2008. Her production company released Snow Flower and the Secret Fan, a historical drama based on a lifelong friendship between two women in 19th Century China.

She is also  a co-founder and investor in Art.sy, a digital start-up focusing on the fine art market.

Wendi Deng has been married twice, more notoriously to global media tycoon, Rupert Murdoch, with whom she became the mother of two daughters, Grace Helen Murdoch and Chloe Murdoch.

Wendi met Rupert who is 38 years her senior at a company part in Hong Kong and they tied the knot in 1999. 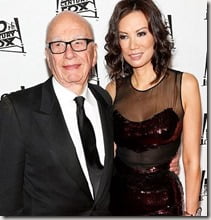 But way before Murdoch, she tied the knot to Jake Cherry, who was a married man and 30 years her senior. It was Cherry and his wife who sponsored Deng to come to the US. Cherry left his wife and moved in with Wendi but their marriage didn’t last long. They were married from 1990 until 1993.

Could this be a legitimate romance or just a rumor?