24-year-old Walikque Grace Faussett has been identified as the only fatal victim during a shooting that took place early Monday outside a Manhattan club.

Reports say the young woman was gunned down by an angry clubgoer who had allegedly been thrown out moments earlier.

Walikque Grace Faussett was killed accidentally when the gunman was aiming allegedly at Club Motivo’s bouncers. Miss Faussett was taken to Bellevue Hospital where she died of a gunshot wound to the back.

Walikque Faussett was the daughter of Wally Faussett who said to the NY Daily News, “I will search for him because he should pay”

While her 41-year-old mom named as Wendi Rodriguez, told media: “My daughter was a good girl, she loved her son.”

Walikque Grace Faussett who was the oldest of three, leaves behind a young son.

Her Facebook page says she was originally from the Bronx and lived in Middletown, Orange County, New York.

Also caught in the sudden gunfire was a 30-year-old Deborah Raji who suffered a gunshot wound to the shoulder, and 25-year-old woman, Lauren Renee Rondat shot in the hip and foot. Both remain in stable condition, reports say.

All three women, including Faussett were standing outside the club when the fire erupted. 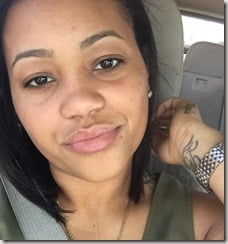 According to a LinkedIn under her name, Walikque Grace Faussett worked as a Customer service at Sams club in Middletown, New York.

Police said, the shooter, who is in his early 20’s, was kicked out of the club early Monday but returned and started shooting. According to AM New York, the shooter was wearing a red and black hooded sweatshirt. He immediately fled the scene in a dark sedan.

Police also mentioned the suspect could belong to a gang and after he got into a fight inside the club and was subsequently kicked out he vowed to take revenge.

According to the NY Daily News, the suspect remains at large and has been named as 26-year-old Dalone (Smack) Jamison and who is believed believed to be a member of the “DYMES R US” gang.

We send our condolences to the families of the three women affected. RIP Walikque Grace Faussett.