The city of Munich was under attack today as a group of unidentified men opened fire at the Olympia mall killing at least six people.

German police launched a massive man hunt and are telling people to avoid public places as the multiple attackers are still on the run.

The alleged shooting took place late Friday at Olympia Einkaufszentrum shopping center, where six people died and several others have been injured.

Latest updates say police was alerted by calls coming from the mall and witnesses around the are. The first call was around five in the afternoon from a McDonald’s restaurant within the mall.

Witnessed told police they saw at least three man armed with long guns on a street near the shopping center.

As of now police believes is a terror attack and advised people:

“The police are operating with all available forces,” “The search is continuing with intensity. Because of the still unclear situation, we ask all people in the city area to stay at home or seek shelter in nearby buildings.”

The Munich Transit Agency said metro, bus and tram service had been halted and Munich hospitals activated an emergency alert, meaning “all on-duty staff stand ready until the number of injured is clear.”

TV images showed groups of police with assault weapons jogging over Munich streets as part of a massive deployment. 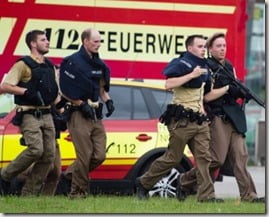 It remained unclear late Friday if the shooting in Munich was related to Islamic terrorism.

Shocking footage taken by bystanders, has made its way into outlets and reveal the moment where two different shooters opened fire from two different positions near the mall. 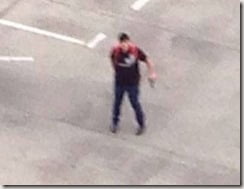 The first video reveals the gunman shooting innocent bystanders outside the packed shopping centre in Munich. A young man can be seen with what appears to be a shotgun while outside a McDonald’s.

A number of shots can be heard as people screaming flee the scene in panic. 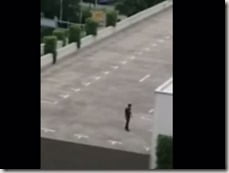 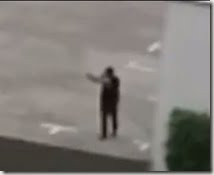 In a second video, an unknown man is seen walking across the roof of the shopping center’s parking.

Wearing all black, the man who seems to be alone, suddenly turns and pulls out what looks like a handgun and starts shooting.

German security forces have been on alert since a teenage migrant stabbed and injured five people on a train in Bavaria on Monday, in an attack claimed by so-called Islamic State.

As of now, Munich continues to be in lockdown and victims number could rise. Watch the shooter below.