Val Chmerkovskiy, the 30-year-old hunky pro dancer from DWTS, who last year said was ready to fall in love, appears to have finally found the one. Val seems to be head over heals about fellow pro dancer, Jenna Johnson.

The couple who is eight years apart were seen packing on the PDA during a romantic outing earlier this year. Back in February, Jenna and Val were pictured holding hands, kissing and looking very into each other. They are said to have been dating on and off since 2014.

It is not hard to imagine why the couple fell for each other. Though Val is a strong dancer, 22-year-old Jenna definitely has game.

Want to know more about Jenna Johnson? Keep reading below to read her top ten facts. 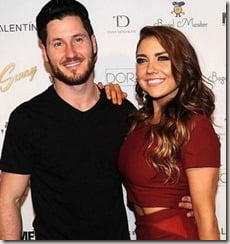 The daughter of Tamara Jean and Curt Johnson, was raised with five siblings: Stacy, Scott, Jillian, Jason and Skyler.

2. She began dancing at an early age

By age three Jenna was already hitting the dance floor. She is trained in ballroom, ballet, jazz, contemporary, and hip hop.

3. She is a former troupe member on Dancing With The Stars.

The lovely and talented Jenna performed as a troupe dancer on seasons 18, 19, and 20 of Dancing with the Stars.

Jenna decided to ditch University in order to focus on her dancing.

5. She Competed On So You Think You Can Dance

6. She is a ballroom dancing teacher

Aside form her DWTS gig, Jenna is also teaches private ballroom dancing. She was a mentor to Jake Monreal on So You Think You Can Dance: The Next Generation.

7. She debuted as a pro dancer on season 23 of DWTS

Jenna who joined the DWTS troupe in 2014, hit the floor as a professional dancer on season 23 and was paired up with actor, Jake T. Austin. They got the boot after only two dances.

8. She was romantically linked to Jake T. Austin

It is not something odd to get close to your dancing partner, but these two have said they are only friends.

Jenna had to subbed for Burgess who injured her knee laving Race car driver James Hinchcliffe without a partner.

Jenna reveals she runs about four miles every day. She has become an inspiration for others.