Last month, leaked documents left the married singer, songwriter, dancer and actor in a very questionable position. Usher allegedly contracted Herpes sometime between, 2009 -2010. What’s worse he infected a partner which resulted in an alleged civil suit. He paid for the woman’s doctor bills settled the case for $1.1 million.

Since then, at least two others have come forward accusing the star. Sharpton is the only one who has decided to use her real name. 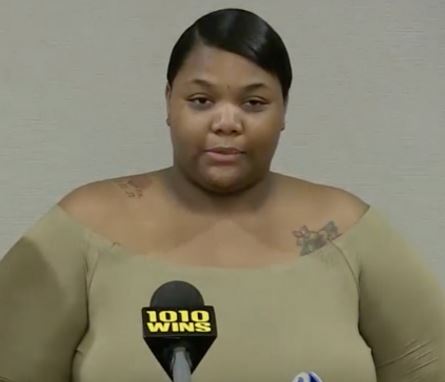 She spoke openly about her sexual encounter with the musician which took place a few years ago.

Sharpton who is being represented by celebrity lawyer Lisa Bloom, appeared this morning, saying she was celebrating her 19th birthday at an Usher concert. At the time, Quantasia who was wearing a birthday crown was picked to go backstage before the show.

Sometime later a security guy asked for her number saying Usher had seen her and was interested in her. Quantasia Sharpton then said the musician rang her and minutes later appeared at the hotel she and her friends were at.

After talking for some time, she told how she and Usher engaged in sexual contact. Reading her statement, she went onto say Usher did not warn her about his alleged herpes diagnose and that if he had, she wouldn’t have consented to *** with him.

Sharpton who never heard from Usher following their one time encounter, is actually the lucky one since she revealed she does not have herpes, however wanted to step up for others who might be too afraid to talk.

Quantasia who revealed she gave birth about a year ago -said she contacted Lisa Bloom after hearing reports of Usher having Herpes -saying she felt her rights had been violated.

Usher who married Grace Miguel in 2015, has kept silent about his current health status. Meanwhile Bloom is filing a lawsuit in behalf of two women -one of them being Miss Sharpton -and one man. Her clients claim they all had sexual episodes with Usher since his alleged diagnose. At least one of her clients tested positive for Herpes.

Though Quantasia’s lawyer said she isn’t sure if Usher even has the STD, she also said she has never denied the accusations.

Not more details are known about Quatasia Sharpton but keep coming back for updates.