Beth Penny is the wife of businessman Steve Penny, -who until last year served the president and chief executive of U.S.A. Gymnastics.

Beth’s husband has been arrested over allegations that he tampered with evidence in the sexual assault investigation into the disgraced national team’s doctor Larry Nassar. According to the NY Times, a grand jury in Walker County, Tex., indicted Penny last month, on allegations that he had ordered the removal of documents after learning that an investigation had begun into Nassar’s behavior.

Born Stephen D. “Steve” Penny, Jr. –he worked for nearly two decades for U.S.A. Gymnastics, including 12 years as its president. He attended the University of Washington in 1987 graduating with a degree in speech and communications. 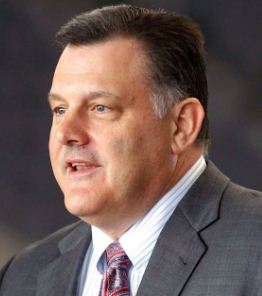 54-year-old Penny, from Mercer Island, Wash., began his career in the marketing and promotions department of the Seattle Mariners before becoming an Olympic sports researcher for Turner Broadcast System. From there, he took a job as director of media and public relations for U.S.A. Cycling in the early 1990s.

Penny began working for USA Gymnastics in 1999 –in the role of senior vice president, focusing on business development. He was named president in 2005.

He resigned in March 2017 after more than 80 gymnasts came forward with sexual abuse allegations against Larry Nassar last year. Earlier in the case it was revealed that he failed to report sexual assault accusations against Nassar. Penny has refused to speak about the Larry Nassar case.

Steve and longtime wife Beth Penny are the parents of triplets. Beth Penny gave birth to three daughters in 2008, Sarah, Ella and Stephanie. Like her husband, Beth has kept a low profile since the whole thing began. The family currently reside in Indiana.

If convicted, her husband could spend up to 10-years in jail.