Deborah’s husband came out of retirement in June to serve as chargé d’affaires in Kyiv after Marie Yovanovitch was ousted as ambassador to Ukraine.
According to reports, Taylor was issued a subpoena Tuesday morning by the House Intelligence Committee and the 72-year-old testified as part of House Democrats’ ongoing impeachment investigation.
Bill is a Career Foreign Service Officer who served as the U.S. Ambassador to Ukraine From 2006 to 2009. Most recently, he was the Executive Vice President of the U.S. Institute of Peace, among his key posts in the Middle East. In addition he is a Vietnam War veteran who graduated of the United States Military Academy at West Point and Harvard University’s Kennedy School of Government. 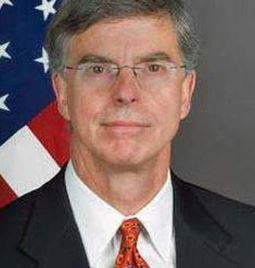 He and wife Deborah Taylor have been married for many years. Together they are the parents of two adult children.
Deborah Taylor surely has kept a low profile despite being married to her diplomat husband.

Not many details are known about the spouse and mother of two, and there’s little info available on her, however she took part in an interview along with her husband in which she is described as a religion scholar.
In another article she is called, Dr. Deborah Taylor ‘an outstanding scholar in religious history and an expert in religious objects and art’
In the article is said that Deborah Taylor assisted with the FIAE Ukrainian Icons and Religious Objects program at the U.S. -Ukraine Business Council (USUBC). At the time Deborah who holds a Ph.D, served as the curator.