Meet Susan Andrews Carlson; she is the wife of political news correspondent, Tucker Carlson. Her husband recalled the time when GOP front-runner Donald Trump left a message on his answering machine and called it a “Trump attack: shocking, vulgar and indisputably true.”

The 46-year-old correspondent and conservative pundit for the Fox News Channel and has been reported as one of the richest TV personalities with an estimated net worth of $8 million dollars. Though there is no official record of his annual salary, it is believed around $500 thousand dollars.

Susan Andrews Carlson has been married to her husband since 1991. The couple met while attending St. George. A the time they went to the high school, Susan Andrew’s father was the school’s headmaster.

Her husband went on to follow his father’s footsteps. Tucker Carlson’s father was a longtime anchorman on local news in Los Angeles and San Diego, who later in his career served as Director of Voice of America in Europe, and then as President and CEO of the Corporation for Public Broadcasting.

Tucker is a graduate of Trinity College, where he majored in History. He started his career from “Policy Review”, where he was in the editorial staff. He worked in many newspapers, from which he earned a lot of popularity. Tucker has written articles for the popular newspapers such as The New York Times Magazine, The Weekly Standard, Esquire, The New Republic and The Daily Beast. 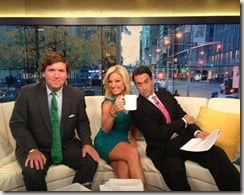 The marriage of 25-years are parents to four children.

Susan Andrews Carlson is the mother of three daughters Lillie, Hopie, and Dorothy Carlson. The couple also has one son, Buckley Carlson. Below Susan with daughter Hopie Carlson. 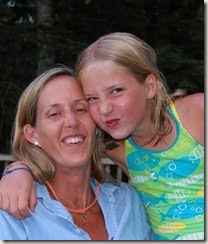 Susan Andrews Carlon must be used to her hubby getting into media catfights. It is not the first time Tucker faces scandals. Though he has been very successful,  he was fired from CNN for an unnecessary comment on “Crossfire.”

Her husband is also co-founder and editor in chief of The Daily Caller, and a host of Fox & Friends on the weekends.

Though her husband has been seen countless times on television; the same cant be said about the mother of his four children. It appears though her husband spends most of his life in the public, Susan Andrews Carlson prefers to play it safe under the radar.

Not much is known about her but online records show she as previously worked at St. Patrick; Fcps;  At Your Service Hospitality Management LLC.

Susan Andrews Carlson and her family live in a farmhouse from the early nineteen hundreds that they have renovated, in Alexandria.