Gene Evin Atkins is the man responsible for the death of one woman during a standoff at a Trader Joe’s in Los Angeles.

According to reports, the 28-year-old suspects had been arguing with his grandmother and girlfriend prior to the shooting rampage that killed one woman. Atkins is said to have burst into the Trader Joe where victim, Melyda Corado was the store manager. He led a three-hour long standoff that included several hostages. Moment before he had shot both his 76-year-old grandma identified as Mary Elizabeth Madison and girlfriend –who still remains unnamed.

He then took his grandmother’s car, crashed it and began a pursuit with police. Atkins eventually fled shooting several rounds to officers and made his way into the Trader Joe’s.

The deadly victim, Melyda Corado is said to have been shot, as result of the crossfire between police and the suspect.

Atkins is currently in police custody and is being held at $2 million bail. His charges include suspicion of murder. He was first taken to USC Medical Center to be tended due to an arm injury. 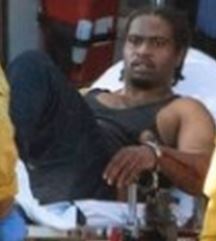 This wasn’t the first time Gene Evin Atkins and his grandmother faced problems. According to The Los Angeles Times, back in 2010 –his grandmother sought a temporary restraining order against him. The publication also says he has a previous arrest for suspicion of vandalism from 2008 for which he was not charged.

Atkins who is the father of two daughters, was licensed to work as a security guard. It’s been revealed through family members that Atkins –who lived with his grandmother –wind up with her after his father was sent to prison when he was only a young boy. His mother wasn’t able to look after him either because she was a drug addict.

A cousin of Atkins told media that they’ve had numerous violent arguments and that his grandmother cared for him despite prior run-ins with the law. The latest feud between grandmother and grandson –is said to have erupted over his girlfriend’s presence at the home they shared in South L.A.

Though Atkins shot his grandmother and girlfriend numerous times, both women are said to be in stable condition. His girlfriend is yet to be identified. The grandmother allegedly did not want Atkins’ girlfriend at their house.