Tracy Rannazzisi is the lovely wife of 37-year-old actor and stand-up comedian, Stephen “Steve” Rannazzisi. Tracy’s hubby has caught himself in a bit of a pickle!

Recent reports indicate Steve –known for his work on the FXX sitcom The League –has a little secret he’s been keeping for the past 14 years! Steve was recently confronted about his story on being at the South WTC tower during the 9/11 attacks, and admitted it was all a big fat lie.

Also, this was not his only lie; he said his girlfriend at the time, now his wife, was also meant to work in the towers that day, but in fact she was scheduled to work at the World Financial Center.

Is a series of tweets he revealed just hours ago: “Center towers on 9/11. It wasn’t true. I was in Manhattan but working in a building in midtown and I was not at the Trade Center on that day”

The actor who plays fantasy football league player Kevin MacArthur, began lying after he moved to Los Angeles with Tracy –then his girlfriend –shortly after the attacks –which he said is what inspired him to pursue a career in the industry.

Through the years, Rannazzisi has told the story a number of times, and makes it clear that he was working for the company Merrill Lynch in a midtown office on 9/11. His then-girlfriend, now wife, Tracy Rannazzisi, was also due to be in one of the towers that day, according to his previous accounts. 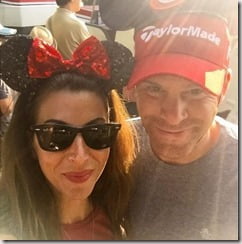 The truth? Merrill Lynch didn’t have an office in the south tower. Steve did work in Midtown that day just not for Merrill Lynch. Tracy Rannazzisi used to work as a temp in the financial district of Manhattan, nearby.

According to IMDb, Tracy Rannazzisi was born, Tracy Renee Romano, she is also 37-years-old and has had roles including, The League.

She became Tracy Rannazzisi in 2006. The marriage of 9-years are the parents of two children, two small boys.

Just a week ago, she posted a photo wishing her hubby a happy anniversary, saying:

Happy Anniversary babe, still making me laugh 100 years later, and there’s no one I would rather escape with!