Chris Morgan is the man you know as the Long Island bagel shop customer whose rant about dating woes went viral.

Morgan is now again making headlines after he signed up for a celebrity boxing match. Check out everything you need to know about him. 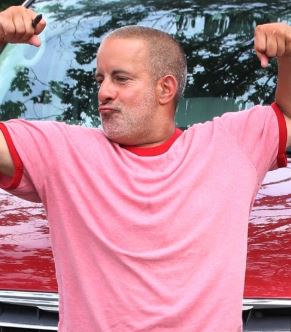 #1 He became popular after suffering a meltdown

Morgan became a viral sensation with his wild rant about getting knocked back by women on dating sites because of his height, lashing out at a female customer before he was tackled by a larger man in the store.
He’s taken to calling himself “Bagel Boss,” the name of the shop where he had the rant.

#2 He will be on the ring very soon

The 5-foot-star of Bagel Boss spoke to media after signing contracts with fighting promoter Damon Feldman to step in the ring on Sept. 7 in Atlantic City.

#3 He will fight another viral video star

Chris Morgan who says he is prepared and needs no training will probably fight Antoine Dodson, another viral video star after his reaction to a home intruder in Alabama in 2010.

#4 He’s been capitalizing on his newfound internet fame

The 45-year-old has been on a press rampage, and now, he’s created a Twitter account and is selling shirts, which bear his photo and “you’re not god or my father or my boss,” a line he said in the inciting video where he ultimately got tackled in a bagel shop.

#5 He lives in a minivan

According to the Post, Morgan lives in a red 2008 Chrysler Town & Country minivan that he parks at Nino’s Deli, where he uses the bathroom. He presumably stays there when not running his cleaning business, which is linked on his Twitter bio and boasts “professional staff.”

#6 He’s been taped before ranting about stuff

Turns out Morgan already had a YouTube page filled with videos of his rants. When asked whether it was all staged, Morgan said it was “not scripted.” “I’m using it to nullify bullying.”

Morgan is divorced but admitted to TMZ he is looking for someone. Morgan told TMZ what he seeks in a dream woman: “Educated. Not a greedy bimbo.”