Aniah Blanchard, the Alabama college student who has been missing since late October -is believed to have been found in a wooded area in Alabama.

The teenager who was last seen on October 23 at a Gas Station in Auburn, has been missing fro more than a month. However, reports say police may have found her remains.
Check out her top facts. 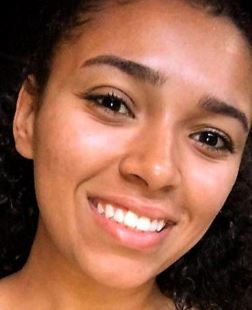 #1 She has been missing since last October

Cops have been searching for Aniah ever since she went missing from a Chevron station on Oct. 23. Blanchard was last seen outside a convenience store.

#2 It is believed she was abducted

Her stepfather, Walt Harris said it’s unlike his stepdaughter to fail to return home, especially when she had work the next morning. She is always in contact with her family, he says, so when her brother couldn’t reach her the next day, the family called the police.
Blanchard’s mother, Angela, and her stepfather, UFC heavyweight fighter Walt Harris, told appeared on Doctor Phil and alleged that Aniah was set up to be taken

3 Aniah Blanchard is the stepdaughter of UFC fighter Walt Harris

Aniah Haley Blanchard, is the teenage stepdaughter of UFC fighter Walt Harris. Blanchard’s last known whereabouts are difficult to pinpoint, her stepfather previously told PEOPLE. She last communicated with her roommate through Snapchat on Wednesday night, just before midnight, saying she would be home soon. But then minutes later she sent a message saying she was with someone named “Eric,” Harris said. When her roommate asked who he was, Blanchard wrote back, “I just met him,” according to Harris.

#4 Her car was found covered in blood

#5 The prime suspect in under arrest

Cops hunted down Ibraheem Yazeed, the prime suspect -who was seen at the gas station with Blanchard in the moments before her abduction.
A witness told police that Yazeed forced Blanchard into a car at the store, although it is unclear if the witness was referring to Yazeed’s vehicle or Blanchard’s SUV. He was arrested in Florida after leading cops on a pursuit and suffered a busted eye during the apprehension. He’s since been charged with 1st-degree kidnapping.

#6 Another two suspects have been arrested

A second suspect in Aniah’s disappearance was arrested on Friday, he’s been identified as Antwain “Squirmy” Shamar Fisher; and who’s also been charged with 1st-degree kidnapping.
Officials have arrested a third person in connection with Aniah’s disappearance.
David Johnson Jr. was taken into custody in Montgomery, AL and has been charged with hindering prosecution, according to prosecutors.

#7 Police believes they have found her remains

In heart-wrenching turn of events in the search for Aniah Blanchard, officials think they found the 19-year-old’s body in a wooded area in Alabama. Police say they found human remains in Macon County, Alabama and they believe it’s Aniah.