Evo Morales served until recently as the President of Bolivia, however the 60-year-old has stepped down amid controversial election results.

According to reports, the leftist president resigned Sunday amid calls from the military and police for him to step down. The election was held Oct. 20, and Morales claimed victory. But protests erupted nationwide challenging the results.

Check out his top facts 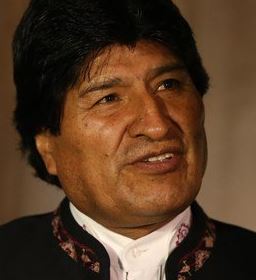 #1 He was the country’s longest leader

Morales was the country’s longest-serving leader and its first indigenous president. He had served as leader since 2006. He ran for a fourth consecutive term in the October elections after a controversial decision by the constitutional court to scrap presidential term limits. He was in power for nearly 14-years.

#2 He belong to the Aymara indigenous group

Juan Evo Morales Ayma was born October 26, 1959; in a rural village in the western Oruro region into a family from the Aymara indigenous group.

#3 He was the leader of a union of coca growers

Evo began his political career as the leader of a union of coca growers. Coca, the raw ingredient of cocaine, has been used in the Andes for thousands of years for religious purposes as well as to combat altitude sickness and as a mild stimulant.

#4 He was unsuccessful on his first presidential run

Morales first ran for president in 2002, promising to govern in favour of Bolivia’s indigenous people, who had suffered centuries of marginalisation and discrimination.
While not successful at first, he won the top job on his second attempt in December 2005.

The US authorities accused President Morales of not doing enough to stem cocaine production and trafficking, while he insisted he was combating cocaine production while allowing small amounts of coca to be grown for religious and cultural purposes.

#6 He did not get along with the US

Mr Morales’ relations with the US were strained throughout his presidency. He even expelled US Ambassador Philip Goldberg, accusing him of conspiring against his government, and suspended the operations of the US Drug Enforcement Administration in Bolivia.

Evo Morales was part of the “pink tide” of left-wing leaders which swept to power across South America in the early 2000s, including such countrys as Venezuela, Bolivia, Brazil and Ecuador.

#8 He failed to secure sea access for his country

One of his main defeats was his failure to secure landlocked Bolivia access to the sea in a dispute with neighbouring Chile, a topic of national pride for many Bolivians. The country lost its access to the Pacific Ocean in 1884 after a war with Chile and has tried to regain it ever since.

#9 His administration invested to fight poverty

The administration invested heavily in public works projects and social programmes to fight poverty. Since he came to office, extreme poverty dropped from 38% in 2006 to 17% in 2018. However, his critics point out that in the last two years, the levels of extreme poverty have been on the rise again.