Sharice Davids is the Democratic congressional candidate, who is in a close race with incumbent Republican U.S. Rep. Kevin Yoder.

Davis has been the target of social media attacks, she has been called a radical socialist and references to her origins have been used as an insult. The official who did this however, Michael Kalny, resigned from his job.

Check out below her top facts 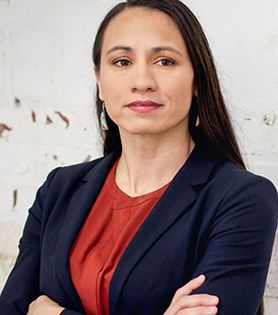 #1 She is a Native American

Sharice is Johnson County resident and member of the Ho-Chunk nation in Wisconsin. She grew up in Leavenworth.

#3 She is a former professional mixed-martial-arts fighter

Davids has a history of competing in mixed martial arts tournaments. “I grew up obsessed with Bruce Lee,” she said. Her family couldn’t afford lessons when she was a kid, but she pursued the hobby as an adult and entered her first tournament at age 26. She competed as both an amateur and professional in Mixed Martial Arts.

#4 Her mother is an army vet

Her mom spent more than 20 years in the Army followed by a career in civil service at the US Post Office.

Davids is a 37-year-old Shawnee attorney who holds a degree from Cornell Law School, spent time working as a legal counsel for a development corporation on a reservation in South Dakota.

#6 She worked for Obama

She served as a White House fellow during the final year of President Barack Obama’s administration.

#7 She worked at the U.S. Department of Transportation

Her time as a White House fellow included the months when Trump first took office. She worked at the U.S. Department of Transportation during the transitional period.

#8 She created a podcast

According to her website, she and her brother created Starty Pants – a video podcast that highlights entrepreneurs in the Greater Kansas City area with a focus on women, people of color and LGBTQ founders.

#9 She will make history if she wins

If Sharice Davids wins in November, she would become the first ever openly gay member of the Kansas congressional delegation, as well as the first female Native American lawmaker in Washington.

According to the Kansas City Star, a local Kansas GOP official lashed out at Sharice Davids on social media earlier this week, saying “your radical socialist kick boxing ******* will be sent back packing to the reservation.”