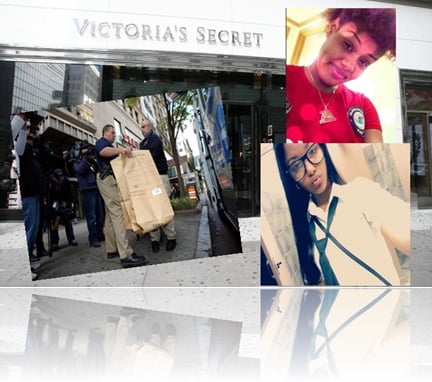 Meet 17-year-old Tiona Rodriguez, she is the Brooklyn teen who was caught shoplifting at a New York Victoria’s Secret store, security didn’t expect o find what they did when they went thru her shopping bag,  the lifeless body of  a newborn baby, born alive at full-term.

“She said she had the baby yesterday,” another source said. “It was not full-term. She said she didn’t know what to do with it.”

Tiona Rodriguez had been originally busted and charged for shoplifting, but after her newborn baby was found dead inside her bag she is also facing homicide charges, an autopsy concluded that the baby had no signs of external trauma and the baby boy’s cause of death was asphyxiation.

Tiona Rodriguez a resident at  Marcy Houses in Bedford was taken for evaluation at was taken to Bellevue Hospital, her  friend Francis Estevez (Janicis Estevez) was detained along Rodriguez who is already a mother of a two-year-old son .