Mollie Gates is the lovely wife of actor, comedian and screenwriter, Thomas Middleditch -whom you might recognize from HBO’s Silicon Valley.

Thomas Steven Middleditch was born on March 10, 1982 in Nelson, British Columbia. His work includes roles on The Final Girls, Godzilla: King of the Monsters and The Wolf of Wall Street. He has also been a regular in viral sketches for the website CollegeHumor.
Most recently he gained popularity for playing Richard Hendricks in the HBO series Silicon Valley.
You may also be familiarized with Thomas for appearing in ads for Verizon Wireless. 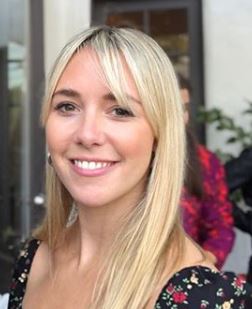 In a recent interview, 37-year-old Thomas claimed that he and wife Mollie have a very open relationship telling his wife shortly after their marriage that their relationship would be “non-traditional.” To her credit, Thomas said Mollie’s response was “Let’s figure this out.”

Contrary to her man, the stunning blonde does all her work behind camera -not that she doesnt look the part. Mollie Gates who now goes as Molli Middleditch is a talented costume designer.
She holds a degree in Apparel Design from Louisiana State University.
According to Gates’ IMDb page, she worked as a costume designer on “Silicon Valley” in 2014. Gates has also worked on major movies such as “Django: Unchained,” “The Twilight Saga” and “The Dallas Buyer’s Club.”

During an interview Mollie revealed that she was working on the Twilight movies while school was in session, completing her coursework at night. Though it wasn’t easy, she also added that it was so fulfilling to see her work on screen.
Since news broke, users have called Middleditch a pig and have said to Mollie that she deserves better. Any thoughts?
Find Mollie Gates on Instagram here.