Thomas Homan has been appointed by president Trump as the new guy in charge of ICE –the US Immigration and Customs Enforcement. 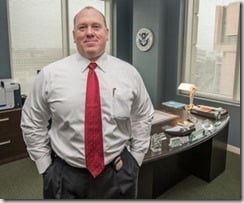 Homan has been involved in immigration enforcement and law enforcement for over three decades. According to Trump’s appointment statement, he’s worked with ICE since it was created in March 2003.

3. Thomas Homan has worked almost every job at ICE

He moved to Washington in 2013, after he was appointed Executive Associate Director.

5. He was given the Presidential Rank Award

In 2015 as Executive Associate Director of ICE Enforcement and Removal Operations (ERO) he was awarded for Distinguished Service. This award is the nation’s highest civil service award.

6. An article described him as being ‘really good’ at deporting people.

The Washington Post published a profile on Homan in which it said in 2015 his operations set records for the share of illegal immigrants expelled from the U.S. who had criminal records.

Speaking about deportations during an interview with the Post, Homan admitted, “Yes, it’s not my favorite part of the job.”

8. He is not ashamed of what he does

During the Post interview Homan said he meets a lot of people who do not view what he does with admiration, instead he tells them, , “we arrest a lot of bad guys,”  “We prevent crimes.”

9. His credits his career for the respect of his staff

Thomas credited his 27 years in immigration enforcement with earning him the respect of the 8,000 men and women on his staff.

10. His success comes from children and families fleeing violence in Central America.

The White House cited his success expanding arrests and detention beds for the recent surge of the group. Children and families in Central America represented almost 60 percent of the total number expelled from the country in 2015.