Therese Okoumou is the woman who tried to scale the Statue of Liberty in an attempt to protest against U.S. immigration policy.

Okoumou was arrested on Wednesday, 4th of July, for scaling the base of the Statue of Liberty. The 44-year-old is a Staten Island resident but Therese Okoumou is actually an immigrant who was born in Congo. She has been living in New York for the past decade.

Therese has become an active participant in the resistance movement against President Trump. She is a proud member of the group Rise and Resist and has been participating in numerous protests with the group.

According to reports, the group did not know she was going to pull her Statue of Liberty stunt and showed concern over her well-being. She was arrested and charged with federal trespassing, disorderly conduct and other charges. 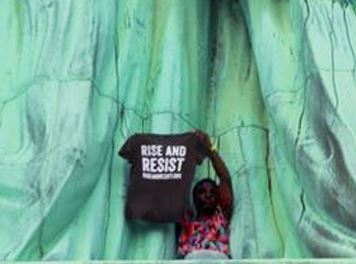 This is actually not her first criminal offense, last year, she got herself in trouble with police for another protest showing. Last august, Therese carried a protest placard and had covered her mouth with tape and refused police demands that she leave the building –during a demonstration against the state Department of Labor on Varick Street.

When not fighting for her cause, Okoumou spends her time working as a personal trainer. She is also listed as a physical therapist.

Therese is scheduled to be arraigned in Manhattan Federal Court on Thursday –for her latest stunt.