Jasmine’s beau is well known for his hosting gigs, first as the host of BET’s popular music video countdown show 106 & Park and later as co-anchor of E! News from 2012-2015. Most recently, Terrence served as the host of MTV’s Are You The One?

The Queens, IL native was born Terrence Jenkins on April 21, 1982; he graduated with a Mass Communications degree from North Carolina A&T State University –where he was also named Student Government Association President.

Jenkins began his career a radio DJ, during his formative years he worked for North Carolina A&T’s radio station WNAA and also at the local radio station 102 Jamz in Greensboro.

Terrence auditioned for BET’s hosting gig in 2005 and served in that role from 2006 until his departure in 2012. That year he was chosen to replace Ryan Seacrest as co-anchor for E! News. As an actor he’s also portrayed a number of roles for productions such as ‘Burlesque’ and ‘Think Like A Man.’

Prior to his current relationship with Sanders, he dated Nicole Bilderback. 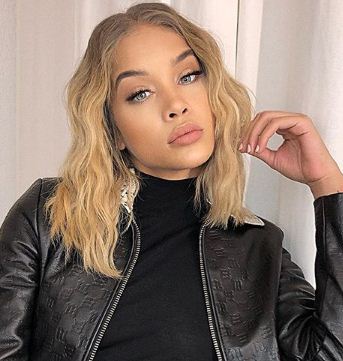 Jasmine Sanders aka ‘Golden Barbie’ is a model who has made for herself over the years. She has done runway, print, and the occasional movie appearance.

In addition to modeling, she appeared in the film, School Dance. She has also appeared in the **** Hair! (2014) and the TV show Hip Hop Squares (2016). Most recently, Sanders helped launch CÎROC Vodka’s new collaboration with Italian fashion house Moschino at Milan Fashion Week.

She and Jenkins began dating in 2016, she was previously linked to Chris Brown, Rob Kardashian, Young Jeezy and Nick Cannon.

With over 3million followers, no doubt Sanders is winning at life. Check her out on Instagram here.