Teresa Reveles is the live-in housekeeper of fitness guru Richard Simmons. It’s been two years since the high-energy fitness icon Richard Simmons has been seen, and people close to him have become concerned about his well being.

In the midst of his disappearance, a name has come up, Teresa Reveles, being accused of keeping Simmons a hostage.

In March 2016, Richard Simmons’ friend Mauro Oliveira spoke with the New York Daily News, saying Teresa had cast a spell on Richard and was keeping him out of the public eye.

Several acquaintances of Simmons’ say they were turned away at the door by Reveles when attempting to visit Simmons with their concerns, arousing more suspicion in Oliveira.

On Monday, Richard himself addressed the nasty rumors, and said “no one is holding me in my house as a hostage” and “I just sort of wanted to be a little bit of a loner for a little while.”

But is Teresa Reveles really off the hook?

Some might say yes, but others might not be so sure, fact that this interview happened via phone, from inside his house, is not exactly definitive proof that he’s not completely housebound.

Though others seem to believe the real reason is Simmons’ health. He also added that, despite some current health setbacks, “I’ll come back, and I’ll come back strong.” 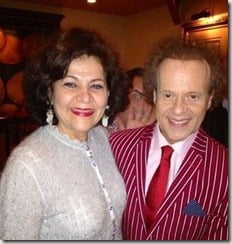 This is not the first time her name comes up. According to the Daily Mail, in 2014 she told outlets “He’s perfectly fine. He’s home and he’s fine.” It was her specific task to turn friends or associates away. At the time Teresa –who lives on the property insisted there was nothing to worry about regarding Simmons’ physical or mental health when speaking to MailOnline.

According to TMZ, it got to the point where friends called police to report elderly abuse but police saw nothing wrong after they paid him a visit.
Any thoughts on Teresa Reveles?