Ruben Velazquez has been named as the unpleasant man who stalked day and night non other than supermodel, Stella Maxwell.

Ruben Velazquez is said to have sent the stunner, dozens of threatening messages -as a result he’s been ordered to stay away from Maxwell.

Born May 15, 1990 in Belgium; the gorgeous blonde was raised in Belgium and New Zealand by Northern Irish parents, she grew up with siblings named Patrick, Martin, and Helen.
Stella began her modeling career while she was a student at the University of Otago in Dunedin, New Zealand.

The Victoria’s Secret Angel quickly transitioned to the high fashion catwalks after capitalizing on her association with the lingerie brand.
Famous for her participation in the 2014 Victoria’s Secret Fashion Show, this Belgian-Irish model is also known for her advertising campaigns for H&M, Urban Outfitters, Puma, and Ermanno Scervino, as well as for her photo shoots for Glamour, Elle, and Vogue. She’s also modeled for the acclaimed fashion designer Marc Jacobs. 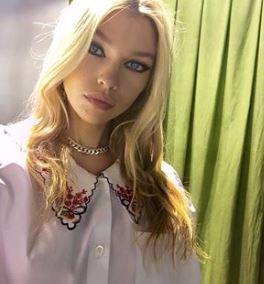 At different points in her career, she was represented by Oui Management, The Lions Agency, and the Why Not Model Agency.
She began dating Kristen Stewart in 2016, however they ended the relationship in early 2019. However, the Twilight actress and Maxwell sparked reconciliation rumors this spring only to confirm the split in August.

In contrast with her success as a model, Stella has also experienced the not so glamorous side of fame. Reports say Ruben Velazquez began stalking her and sent her dozens of messages on Instagram. A message included ‘I’m thinking of burning your house’ and ‘I will leave you in a wheelchair’
Another message featured a photo that Velazquez took just feet from her front door.
Ruben Velazquez has been separately charged with criminal threats and harassment in a case that has yet to come to court.

Maxwell was granted a five year restraining order against Velazquez. The Daily Mail reports the order banned him from getting within 100 yards of her at all times.