Spiros Feretzonis has been accused of the stabbing of a woman which took place last week in Brooklyn.

Spiros is said to have randomly attacked Yasmin Ibrahim, who was walking to her parked car on 83rd St. near Fifth Ave. in Bay Ridge about 6:40 a.m. when cops said Feretzonis attacked her.
During the attack on February 5ht, Spiros Feretzonis knifed the woman in the stomach and ran off.

34-year-old Yasmin then managed to get to NYU Langone Hospital-Brooklyn on her own. The wife and mother is currently at home recovering from her wounds. Her husband named as, Muhammad Soleiman told cops his wive’s attacker is a total stranger for the couple.

The time is out for Spiros Feretzonis who was arrested on Monday, exactly five days after the attack. Police was able to find him after after photos they released of a suspect were identified by people close to Feretzoni an a call was made to Crime Stoppers. Apparently he was busted after his family and friends recognized him from the wanted photos. 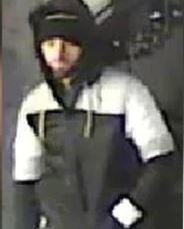 Spiros was arrested Monday on assault charges in the stabbing, then charged in two other incidents.
The other two charges steam from another incident which took place over the weekend. Police believes Spiros Feretzonis punched his older brother in the face. In addition, Feretzoni yelled and cursed at a 62-year-old woman he wasn’t related to, threatening to kill her, last month. That outburst violated a judge’s order, leading to a criminal contempt charge, police said. Apparently the woman had an order of protection against him.
A motive for the stabbing is not clear, Feretzonis is currently waiting arraignment in Brooklyn criminal court.