Carlo Ponti is the late husband of iconic actress and model, Sophia Loren -who at 85 is one of the last surviving stars from the Golden Age of Hollywood.

Carlo’s wife was born September 20, 1934; in Rome, Italy as Sofia Villani Scicolone. After taking place in a beauty pageant Loren began her acting career while in her teens.
Loren went onto win an Academy Award for Best Actress for her role as Cesira in the 1962 film Two Women -becoming the first actress to win an Academy Award for a non-English-speaking performance.
Her other notable films include Marriage Italian-Style, A Countess from Hong Kong, Sunflower and More Than a Miracle. She voiced the character Mama Topolino in the 2011 Disney feature Cars 2.

She married Carlo Ponti in 1957; the couple divorced in 1962, but remarried in 1966. The longtime cuople had two sons together Edoardo and Carlo.
They first met when she was just 16, at the time of their marriage Loren was 23 and Ponti who was her senior by 22 years, was 44.
Ponti was a renowned Italian film producer/director; he died aged 94 in 2007 from pulmonary complication. He is survived by four children Guendalina and Alessandro from his first marriage to Giuliana Fiastri and Edoardo and Carlo from his second marriage to Loren. 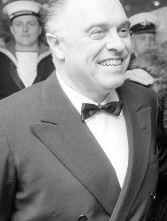 Ponti remained with to Loren for nearly five decades. Their romance is often described as one of the greatest modern love stories. Until 1970, divorce was against the law in Italy. After Ponti and Loren got married in 1957, he was charged with bigamy and she faced excommunication from the Catholic Church. In 1962, the couple gave in to legal pressure and had their marriage annulled, though they stayed together. However, the two got married again in 1966.

Born December 11, 1912 in Magenta, Italy -to Leone Ponti, a music printing shop owner, and the former Maria Zardone.
Carlo Ponti is well remembered for his work on the 1965 classic film Doctor Zhivago. He also produced La Strada, a 1954 film directed by the legendary Federico Fellini. Though he studied law at the University of Milan -he produced more than 140 films over the course of his career. He entered the movie industry by chance after a friend asked him to join a film company, where he soon became executive vice president and resolved to be a producer.
He collaborated with another master, Dino De Laurentiis, from 1950 to 1957, then produced films independently.
Among the many films Ponti produced were Vidor’s “War and Peace” (1955) and three of Vittorio de Sica’s landmark works — “Two Women,” “Yesterday, Today and Tomorrow” (1963) and “Marriage Italian-Style” (1964).
Others were Godard’s “A Woman Is a Woman” (1961) and two Antonioni hits, “Blow-Up” (1966) and “The Passenger” (1975).
Ponti who was also an art collector, owned work by Pablo Picasso and other acclaimed visual artists.