Sonia Ben Ammar and Brooklyn Beckham have bee spotted together and tabloids are going crazy about a possible relationship between the two youngsters!

It might be hard to believe the eldest son of soccer star David Beckham and pop star mom, Victoria, is 16-years-old already and could possibly be dating! According to US Weekly, Brooklyn Joseph Beckham and Sonia Ben Ammar met at a family trip to the Maldives earlier this year and have grown closer ever since.

But who is Sonia Ben Ammar?

Sonia happens to be a French born actress, she is also 16 and according to her IMDb, she’s already had roles in two projects including the 2007 “Winx Club: The Secret of the Lost Kingdom” and the 2013 “Jappeloup.” According to the Daily Mail, the up-and-comer is building her own career with stints on Broadway and in French cinema already under her belt.
The 16-year-old aspiring model and photographer snapped a picture of the teen actress from the back as they took in the sights of the French capital earlier this week. Were they perhaps on a date?

Another possibility is the gal could be politely helping Brooklyn –who told Miss Vogue UK magazine this month that he’s keen to study art and photography in the US, could Sonia Ben Ammar be then, part of an art project for Brooklyn? 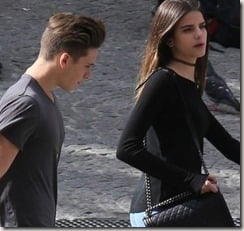 Brooklyn is a star in his own right, the teen is used to getting attention wherever he goes and seems quite comfortable interacting whit his fans. Pretty Sonia Ben Ammar, could also direct her career in the singing path, YouTube videos of her show her singing skills.

According to the Mirror, Sonia Ben Ammar is also close to Brooklyn’s family including  his cousisn Liberty and Gordon Ramsay’s son Jack. Photos of the group shows Brooklyn with his arm wrapped around her.

Don’t miss her video below!