Sienna Johnson is a 16-year-old who is being charged for plotting a Colorado high school shooting!

Sienna has been named as one of two suspects who were planning to shoot up students and staff members at Mountain Vista High School in Highlands Ranch, Colorado, in December.

Sienna was arrested last month and charged this week, as an adult.

As the world learns the details of her alleged plot, chilling facts are becoming clearer. The school where Sienna Miller and her accomplice allegedly planned to carry out the attack is just 16 kilometres down the road from Columbine High School — the site of America’s most notorious school shooting.

According to prosecutors, Sienna might have had a fixation with the movie Natural Born Killers. The film became an obsession for Columbine shooters Dylan Klebold and Eric Harris and Sienna had made a number of online references to the film.

The teen also left behind social media material, in which she made references to a number of other school shootings.

While her lawyer told local reporters in Colorado, authorities have “grossly exaggerated” the case against his young client, the local District Attorney strongly disagrees; saying, evidence against Sienna Johnson “has the potential to be something that is of extreme significance to members of this community”

Sienna Johnson’s Tumblr makes different references of past school shootings, while her Webly page is filled with images of written notes, depicting a troubled mind.

Though her wholesome photos doesn’t show the profile of a mass murderer, she allegedly has given signs of dangerous behavior, including harming her own pets. 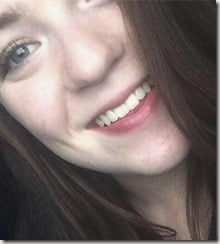 In the days leading up to her arrest, she was being treated at a psychiatric facility at a local children’s hospital and allegedly admitted to police that she was “faking her mental progress”.

The pretty teen writes about a once happy family, but adds things got bad when her father remarried. According to her diary, Sienna was a premature baby, born in October 1999.