Ryan John is the proud boyfriend and baby daddy of stunning model, Mara Martin –who recently appeared on the SI runway.

Ryan’s gorgeous girlfriend made heads turn when she walked the catwalk for SI while breastfeeding her baby girl. The SI show took place at the W Hotel in South Beach, Miami as the brunette happens to be one of 16 finalists chosen from an open casting to take part in Miami Swim Week.

The model and mom is a Monroe, Michigan native who gave birth to daughter Aria, just five months ago. Mara did not only put her name on the map but also her baby girl’s as the crowd went while at their presence.

Mara Martin was born April 19, 1986. She is the daughter of Gayl and John Martin. She has one sister, Schalan and one brother, Johnny. Her dad played football for Western Michigan. 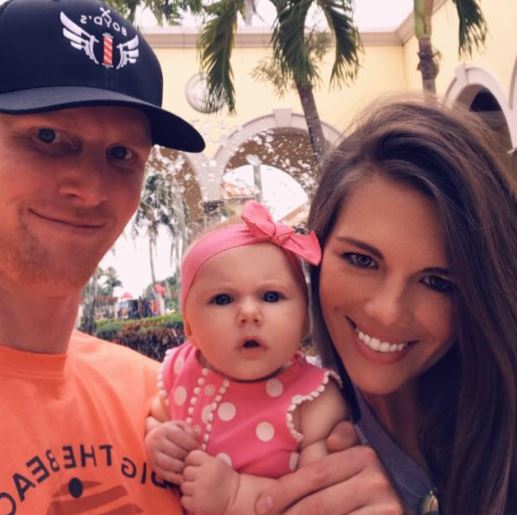 Mara is actually a former college athlete, she spent her first two years of college playing volleyball for the University of Michigan prior to her transfer to University of Georgia. The all-around athlete, Martin also played basketball and ran track in high school.

She graduated from St. Mary’s Catholic Central High School –where she was extremely successful having been voted Female Athlete of the Year, was named All-Region Volleyball Player of the Year (2004) and to the All-State team from 2002-04. She also lettered in track and field and was the first and only student-athlete to receive 12 varsity letters. Additionally the mom of one was recipient of Who’s Who Among High School Student-Athletes and was crowned Homecoming Queen.

Martin who played in over 79 games for the Bulldogs is currently in a relationship with baby daddy, Ryan John. The two have been engaged since October 2017 according to social media. According to his Facebook, he lives in Ontario, Canada.