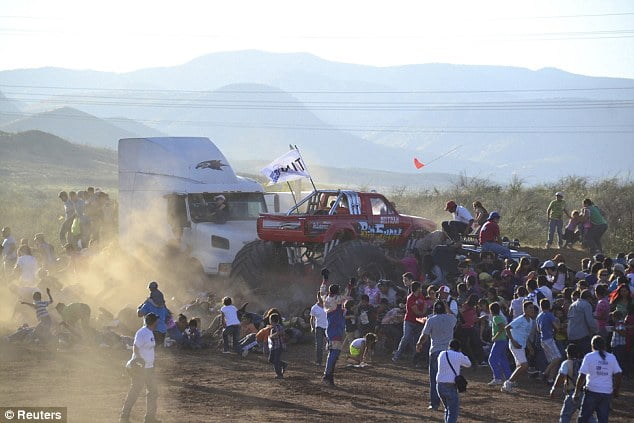 A terrible day Saturday for fans of monster trucks in Chihuahua, Mexico.

At the Extreme Aeroshow , video taken by a spectator shows a truck making an initial pass over two cars, then making a second pass at higher speed, coming down sharply nose-first and bouncing violently before piling straight into the crowd, which stood directly in the path of the monster truck, unprotected by any wall or barrier. Apparently the driver, Francisco Velasquez, lost control of the truck after leaping over cars it was crashing. Many witnesses said that he appeared to hit his head as he drove over the junkers, some reporting that his helmet came off.

The massive vehicle lost control, and plowed into an unprotected group of terrified spectators who tried to flee. Pandemonium ensued. One witness, a Mr. Domiguez, stated that the truck came directly for him and his family. His 11 year old sister was hospitalized with injuries to her legs, and his mother was treated for minor contusions.

At least eight people died, although there have been reports of up to 13, and nearly 80 were injured – dozens critically. Among the dead are two girls, ages 6 and 7, and a 12-year-old boy, the city’s official Facebook page said.

“I fell over, and when I turned around I saw the tire very close. It hit me and threw me to the other side,” said Jesus Manuel Ibarra, 41, according to the Associated Press.

Ibarra was treated for arm and hip injuries. The mayor of Chihuahua, Marco Quezada, said that 79 people were hurt altogether, 12 are in intensive care and four are in critical condition.

The three day show was canceled after the accident that happened on the second day of the exhibition.

Francisco Velazquez, the driver was detained Sunday on suspicion of manslaughter and authorities are investigating whether safety regulations were properly enforced before the show.

We warn you, the video below is very graphic.