Marilyn Wilson was the beloved mother of TV and film actor, Shemar Moore -who recently opened up about his mother’s passing.

Moore, well known as a former fashion model and from TV shows including Young and the Restless as well as Criminal Minds, called his mother ‘his partner in crime’ in a heartfelt tribute where he also revealed her passing on February 8th.
In a series of touching videos, Moore also credited his mother with his sucess, he said: “But everything I am, everything I’ve accomplished is because of this amazing woman. My mother is gone – she ain’t here no more…”

Marilyn Joan Wilson-Moore was born September 6, 1943; originally from Brighton, MA, she was 76 at the time of her passing.
Marilyn Wilson was a university graduate with a degree in mathematics and was a math teacher who later transitioned to working as a business consultant. 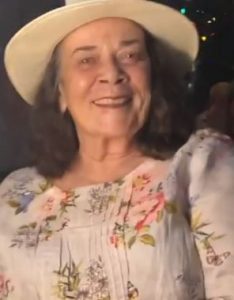 Her obituary reads ‘Marilyn was proud to have taught math in the Boston Public School system. She retired from the International Business division of Hewlett – Packard’
She is described as someone who enjoyed ‘good food and drink, the ocean and listening to jazz. Above all Marilyn loved helping people’

Marilyn Wilson who was born in Roxbury, Massachusetts, and is of Irish and French-Canadian descent, was married to Sherrod Moore. The couple welcomed their only child son, Shemar on April 20, 1970. Moore has no siblings, and his parents ended up separating when he was still an infant.
As a result he spent his entire childhood living with his mother, while she remained single.
The mother-son duo lived in Denmark for a few years, during that time, Marilyn worked as a teacher and Moore attended a British private school.

The single mom received major praise for the move to Europe which was sparked by the civil unrest of the time and by the fact that she had been in an interracial relationship which was perceived a taboo. They returned to the US in the late 70’s settling in California.

Back in 1999, Marilyn Wilson-Moore was diagnosed with Multiple Sclerosis. The exact cause of her death has not been officially determined.