Sean & Brodie Copeland have been named as the two American victims (father and son) who were killed along with dozens of others after a truck mowed them down in Nice, France.

A man driving a truck drove up onto the sidewalk Thursday night and plowed through the crowd during Bastille Day. The attack stretched for more than a mile as he accelerated trough. Authorities say at least 84 people are dead leaving a horrific scene behind.

Sean Copeland and his 11-year-old son Brodie from Lakeway in Austin, Texas were on vacation with their family in France when the attack occurred, family members confirmed to ABC News. 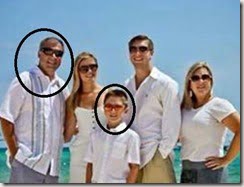 Mr Copeland, an alumni of the University of North Texas in Denton, was the vice president of North and South America for Lexmark Corporation’s Kapow Software Division.  He also served as an administrator on his youngest son’s baseball team.
Kim is his second wife, with whom he became a third time parent to now, deceased Brodie.

Brodie Copeland belonged to the Hill Country Baseball team. He is being remembered by the team –which called for prayers for the family –for his talents on the youth baseball field. 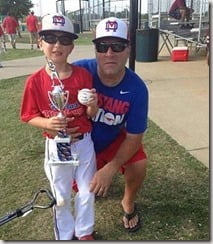 Reports say Sean’s wife and his two adult children from another marriage, 21-year-old Austin and 29-year-old Maegan, ‘witnessed the horrible tragedy but were able to get out of harm’s way’.

Sean’s Eldest child Maegan is technical recruiter for Uber while Austin is a Texas State University senior. The family had embarked on a summer vacation trip –which included stops is Pamplona, Spain and Barcelona. They were also celebrating Austin’s 22nd birthday earlier this month.

Friend and family members have posted on social media after the tragic and unexpected way in which Sean and Brodie Copeland passed.

Many have paid tribute on Facebook and other platforms, saying how wonderful the father-son duo were. Some of the impressions on social media:

‘I’m in complete shock! Some of the best people I’ve had the privilege to know. You will definitely be missed Sean and Brodie.

‘No words can describe how we feel. Such a good man and a great kid and teammate.’