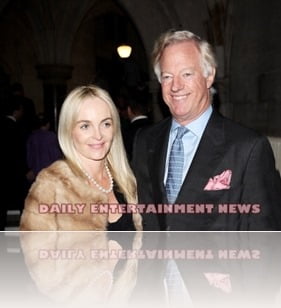 The family of the incredible Margaret Thatcher, The Iron Lady said their last goodbye to their beloved mother, grandmother and mother in-law, her two daughter in-law attended at the funeral, Sarah Thatcher looked impeccable next to her husband Sir Mark Thatcher and his children Michael and Amanda from his first marriage to Diane Burgdorf, now Diane Beckett

The fairy tale story of Hon Lady Thatcher  is sort of a mix of emotions some might think, other told me she the last women  Sir Mark Thatcher bedded while married to his first wife Diane, there might be a few who think she made a mistake and so did Mr. Thatcher, they put that mishap behind them just like Mrs. Burgdorf did and everybody is happy now, really??

Michael Thatcher and his sister Amanda now teenager went thru a rough time when their mother told them she and their father decided to divorce, I think we all remember Mrs. Diane Burgdorf talking how her daughter Amanda wept and wept, and how they had to adjust to their daddy living in another continent. a divorce is a traumatic experience for any child.

The first time Sarah Clemence and Mark Thatcher’ lives crossed ways was in 1989, he was married to Diane, their son Michael was just a few months old.

Diane found credit card record where it showed Mark paid a room at the Ritz in Paris and a plane ticket to Sarah Clemence, who Diane once met in the South of France. It was thanked to a private detective Diane hired to follow Mark that she was certain Sarah and her husband were having an affair, Diane called her and they met..

I had the private investigator find out how I could contact Sarah and she agreed to meet me at her flat. We were cordial to each other but the purpose of the meeting was that I wanted to let her know it was not just about the two of them, that Mark had a family, a wife and a son.

She was five years younger than me and single. I wanted to appeal to her sense of what was right and I thought I’d gotten through to her. It was a friendly chat. I believe that only someone who is a Christian can be forgiving like I was and sit down with her husband’s mistress. My faith gave me the courage.

Mark and Diane went to couples therapy and Sarah Clemence became Sarah Jane Russell, she got married on February 1st, 1996 to Lord Francis Russell, son of Ian Russell, 13th Duke of Bedford and his second wife Lydia, Duchess of Bedford. Sarah Jane and her first husband got divorced on February 2007, during their marriage they had two children together, John Francis Russell born on June 5th, 1997 and Harry Evelyn Terence Russell born on November 11th, 1999.

Sarah was not yet divorce from her first husband  when she and Mark rekindled their affair in 2005, he told Diane he had to go to Geneva on business but friends told her he actually went to the South of France, days later she found he hadn’t been there alone.

On August 25, I heard from friends about a Press report regarding him being sighted with other women. He had been sighted with one of them having dinner in Berkshire on August 15, his 52nd birthday. I’d called him that day with the children to wish him a happy birthday and he’d said he was going to dinner with a friend of his called Graham so now I’d caught him in another lie.

I figured maybe he was back at the Fairmont. I placed a call there and sure enough they put me through to his room. He answered the phone. He was completely shocked it was me. He said: “I can tell you are upset right now and I will phone you later.” He was extremely formal and I suspected there was someone else in the room with him.

He never called me back. Finally I learned the identity of the woman. He was back with Sarah.

Sir Mark Thatcher and his second wife Sarah Thatcher got married on  March 27th, 2008 in secret at a register office in Gibraltar, they have no children together and reside in Marbella, Spain. 52-year-old Mrs. Diane Burgdorf  moved back with his children to the United where they are college student and excellent athletes, good Christians and as their friends describes them Kind and humble people, their mother is now known as Diane Beckett, wife of James Beckett since 2008, Mr.Beckett  a multi-millionaire sports publisher with whom she lived in Texas.