Cameron Ely has been identified as the son of retired actor and novelist, Ron Ely -who was shot by cops after he stabbed his mother to death.

Cameron -born to parents Ron Ely and Valerie Lundeen -is said to have killed his own mother at his parent’s home in Santa Barbara. Authorities arrived at the property following a family disturbance call.

Cameron’s mom, Valerie Lundeen was a former beauty queen, she was crowned Miss Florida. She represented Miami at the 1981 pageant and went on to compete at Miss USA later that year. She and actor husband Ron Ely had been married since 1984. 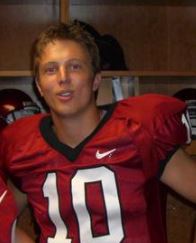 Cameron’s father -who is best known for portraying Tarzan in the 1966 NBC series; also played the title role in 1975 movie Doc Savage: The Man of Bronze. As well as a career studded with occasional parts on TV, Ely hosted the Miss America pageant between 1979 and 1981.
He retired from acting in 2001 but did return for a part in a TV movie called Expecting Amish in 2014.
Ely embarked on novel writing career during the 90s and wrote two mystery books involving the fictional private eye, Jake Sands. Night Shadows was released in 1994 and East Beach one year later. Ron has been reported as safe by the Santa Barbara Sheriff’s department.

In addition to Cameron, the couple also welcomed two daughters, Kirsten and Kaitland Ely.
Kristen Ely studied English language at University of Southern California and also Law at Pepperdine University. According to social media, she is a former Event Coordinator/Designer at Kiki E. LLC and the creator, Editor, Blogger at Blonder Ambitions. In addition she is listed as the founder at The Gild.
Kaitland Ely is the Founder of Sweet Southern California, the blond is married to Jason Sweet and together they have a toddler son, Jaxon.

Cameron Ely who is described as ‘supremely intelligent’ graduated from the eclusive boarding school, Phillips Exeter Academy. On social media photos, he appears to be a popular athlete and even won the school’s Mr Royal talent competition in 2006.
He later graduated with a bachelor of arts in psychology in 2012 from Harvard -where he also played football.
According to the LA Times the Harvard quarterback, was a licensed security guard for the past two years.

After stabbing his mother Cameron is said to have called police crying and blaming his father of attacking his mom. 30-year-old Cameron was shot because he posed a threat to deputies.
A motive for the horrific and tragic attack is yet to be determined.