Mia Moocher a model, has been identified as the close friend and some may even say, romantic interest of Beckham family member, Romeo.

The teens were photographed after his mother’s post-show dinner party in London last month. Mia ‘Mimi’ Moocher shared a video from the Victoria Beckham London fashion show on her Instagram account, though she did not sit with the rest of the Beckham family.
Post-show, she was photographed with Romeo outside Harry’s Bar in Mayfair, where Victoria hosted an intimate dinner.
Mimi and Romeo were first rumored to be dating in July when pictures sprung up of them together on Instagram. Most recently the pair were caught visiting one of London’s Tate galleries over the weekend.

Mia who goes by Mimi Moocher on Instagram, was born Mia Regan. She has an older brother, Finn Regan. According to social media, she is originally from Chippenham, Wiltshire and is a student at St Gregory’s Catholic College. 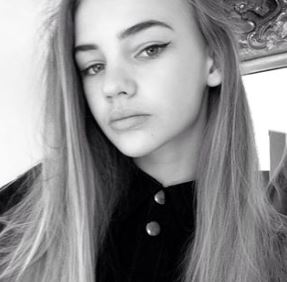 The blue eyed, blond is signed to Storm Model Agency -and though she labels herself as a giraffe, modeling is certainly in her future.
The young model is quite active on Instagram, where she has a little more than 8,000 followers and often posts selfies, music festival videos and even the occasional picture of Romeo.
In fact, she’s been vocal in showing her interest for the 17-year-old, in September Mimi wished Romeo a happy birthday with an Instagram photo of him looking like a ’90s heartthrob. He responded with his own red heart emoji. She also has another photo of him which is saved in her Instagram highlights.

In addition to music festivals, Mia ‘Mimi’ Moocher is also highly interested in sports. The teen stunner is pretty into skorkling, netball and skiing.
Too bad Mia is yet to make it into Romeo’s grind. Prior to Mimi the 17-year-old son of David and Victoria Beckham was previously, rumored to be dating Stranger Things actress Millie Bobby Brown.