Ayda Field is the gorgeous actress wife of English singer/songwriter, Robbie Williams –married since 2010, the two are the proud parents of two children.

Ayda’s hubby is well known for his success in the music industry, Robbie known for hits like Angels, Rock DJ and Feel –began his career in the early 90’s as a member of the pop band, Take That. 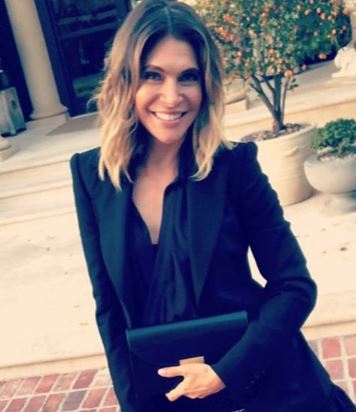 Ayda and Williams tied the knot eight years ago, however the two were first linked together as far as 2006. The two got engaged in 2009 and were hitched in 2010. Since then Ayda Field has given birth to two children, daughter Theodora Rose ‘Teddy’ Williams, born in 2012 and son, Charlton Valentine Williams born in 2014.

Ayda Field who is of Turkish descent on her father’s side, was born May 17, 1979. The Los Angeles native is the daughter of Haldun Evecan and movie producer mother Gwen Field. She lived in Turkey following her parents split when she was just 4-years-old.

The stunner became interested in acting as a child and got her big break on the NBC soap Days of Our Lives. You might remember her as Angela Moroni on Days of Our Lives, role she played for a year.

Since then she’s landed numerous TV roles, mostly on the comedic side. She’s been seen alongside Kelsey Grammar in the shortlived Fox sitcom Back to You. Other work includes small roles on the series Eve, Studio 60 on the Sunset Strip.

In 2016, she landed a role on British comedy series Fresh Meat as Rosa and the British drama series Paranoid as Sheri. That same year she joined ITV chat show Loose Women as a guest panelist. At the time she caused quite a stir when she revealed she sometimes faked orgasms.

Though her talent is undeniable, her profile has deniftely been raised thanks to her association with the British star. Ayda who’s also developed a career as a TV host will be soon seen on British X Factor.

Check out the wife and mom of two on Instagram here.