His management team had this tos ay about him,

Zombie Boy, Rico, was loved by everyone who had the chance to meet and know him. Icon in the artistic scene and in the fashion and entertainment industries, this innovator has charmed all hearts.

The news shocked his loved ones who say he was excited about upcoming projects hence, taking his own life doesn’t feel right. It was Genest´s girlfriend who found his body. The couple were at her apartment when he allegedly told her he was going to the balcony for a cigarette. Next thing she knows, he is dead. Police believed he jumped to his death but close ones don’t think so.

Rick grew up in Montreal, at age 16 he got his first tattoo, a skull and crossbones on his left shoulder. Leaving school at 17 he discovered punk culture while washing cars for cash.

Genest’s reason behind his tattoo art work came after he, at age 15, discovered he had a brain tumor. While waiting for the operation, he decided to live life to the full and began experimenting with tattoos. 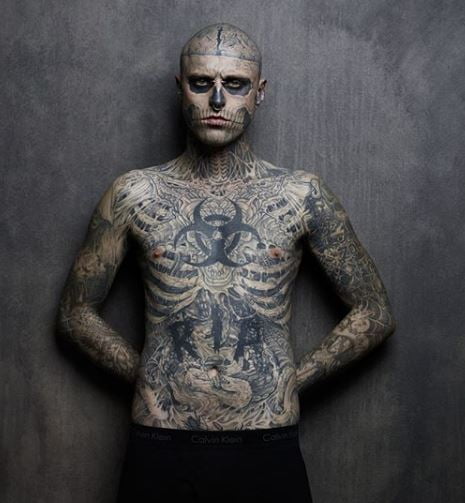 The idea of turning himself into a walking, decomposing corpse was inspired by his love of the Living Dead movies and his tumor.

To treat the tumor he had to have 50% of his brain removed. But Rick carried on decorating his body with ghoulish tats.

Thanks to his unique look, Rick’s showbiz career began when he started appearing in freak shows, exhibiting his tattoos and lying on a bed of nails. But then his Facebook fan page was spotted by Lady Gaga’s stylist and he went on to make a cameo in her 2011 video Born This Way, in which she recreated Rick’s tattooed look.

Before long he was modelling on the catwalk as the face of Jay Z’s fashion label Roc-A-Wear and landed a Guinness World Record for most bones inked on a human body – 138. He also appeared in the adventure fantasy 47 Ronin with Keanu Reeves.

But away from the limelight, Rick enjoyed a quiet life with his girlfriend, who is yet to be named. Reports say she was taken to a hospital in a complete state of shock, following Rick’s death.