Sarah “Polly” Spencer is the longtime wife of former Secretary of the Navy -Richard Spencer -who has been fired from the top job.

Sarah’s husband is also known as a highly successful entrepreneur; the 65-year-old had been serving as Secretary of the Navy since being chosen by Donald Trump in 2017. However, he was terminated over his handling of the case of SEAL Eddie Gallagher, whose demotion for taking a photo with a corpse had been reversed by President Donald Trump.

Richard Vaughn Spencer was born on January 18, 1954, in Waterbury, Connecticut. He graduated from the exclusive Brooks School in North Andover, Mass., in 1972, and earned a B.A. in Economics at Rollins College in Florida in 1976.
Upon graduation, Spencer joined the U.S. Marine Corps and served until 1981, rising to captain while serving with the Southern California-based 3rd Marine Air Wing as a helicopter pilot.

After leaving the Marine Corps Spencer was vice president of Spirit Airways, before heading east to find his fortune on Wall Street. Spencer worked on Wall Street for 16 years, from 1982 to 1998.
In January 2007, he became vice chairman of the New York Board of Trade. Since 2008, Spencer has been the sole proprietor and managing partner of private investment company Fall Creek Management LLC of Wilson, Wyoming, which specializes in capital acquisition and management consulting. He is a director of Global Atlantic Financial Group. He was confirmed as secretary of the Navy in 2017. 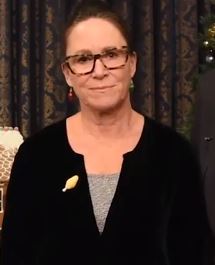 Spencer is currently married to second wife, Sarah “Polly” Spencer. Richard was previously married to Erin Linda Wolf in the 80’s. From his first marriage, he is the father of two adult children Averil and Pierce.

Sarah “Polly” Spencer, full name Sarah Pauline Polly Finch Spencer -met her husband in Nantucket. At the time she had a house there and Spencer was visiting his sister. According to N-magazine -there is a ship named after his wife.

Though not many details are available on Sarah “Polly” Spencer -who clearly leads a private profile -is safe to say she has been supportive of her husband’s career. Moreover, Sarah “Polly” Spencer has been active in Navy events, even visiting military bases. In 2017 she toured Camp Lemonnier’s facilities -at the time she visited the Fitness Center, Navy Exchange and galley. That same year, she also visited the Naval History & Heritage Command (NHHC) to learn more about the command.