Marc Daly is the mystery fella who became Kenya Moore’s hubby just a few weeks ago. Needless to say, we want to know who the heck is the guy Kenya waited 46 long years for!

No need to introduce you to the stunning 46-year-old RHOA star, but what can you tell us about her man? No worries, we got you covered!

Marc Daly caught media attention just after he became the husband of Moore.

The former Miss USA turned TV personality and business woman and Daly, had a short romance and said their I Do’s’ on June 10, 2017 –after having met for roughly a year.

Moore –who is in the beauty industry –revealed on social media she met her man in 2016 but didn’t see him again until that December. After being reconnected they clearly became inseparable.

Kenya kept pretty hush-hush about her man but has been slowly releasing new details about Daly.

The two were introduced by mutual friend Chef Roblé Ali.

47-year-old Marc Daly is also an entrepreneur. However, Kenya has said in interviews he has no interest in being on TV –which could potentially ruin her relationship with Bravo. According to recent reports, producers allegedly only want Kenya in season 10, if they can document the couple’s relationship.

Kenya told People that she doesn’t think she rushed into marrying Marc Daly and that one of the things he likes about him is that he wants things to be ‘about the two of them.’ 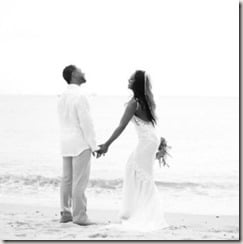 Marc Daly is a former banker and is currently in the restaurant world. He is the owner of Brooklyn, NY restaurant SoCoBK. According to a statement, “Marc is a former investment banker and would SHUT DOWN the back of his restaurant – so that Kenya (Moore) could eat in peace.

Marc got his license as a broker in 2006, and has previously worked at Credit Suisse First Boston New York and Citigroup.

The two tied the knot before their close friends and family in St. Lucia for an intimate beach wedding. Daly also happens to be a dad, so that means he may have been married in the past.

While we all have our doubts, Kenya assures that she and Marc Daly are the real deal, saying that she has never been the girl to marry for the cameras and that she will never be that girl.

Think the minute Marc Daly appears on TV will be the end for the couple?