Rev. Gregory Jacobs is the last husband of late judge Sheila Abdus-Salaam. His wife was found dead in the Hudson River last week.

Rev. Jacobs and wife Sheila Abdus-Salaam were married for less than a year. Abdus-Salaam was well known for being the first black woman to be appointed to a seat on New York’s highest court.

She was born Sheila Turner on March 14, 1952. She attended public schools in DC before graduating from Barnard College in 1974 and Columbia Law School in 1977.

Since 2013, Judge Abdus-Salaam had been one of seven judges on the State Court of Appeals. Before that, she served for about four years as an associate justice on the First Appellate Division of the State Supreme Court, and for 15 years as a State Supreme Court justice in Manhattan. She is described as a social justice ‘pioneer.’

She took the surname of her first husband and kept it  during her professional career. She was married a total of three times.

Due to the fact that her first husband, was a Muslim it was reported that she was the first Muslim to be a member of the New York Court of Appeals. However, she never converted to Islam.

Her second husband was James Hatcher, whose father Andrew Hatcher, worked as a press officer for John F. Kennedy. 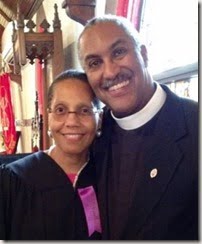 Rev. Gregory Jacobs and Abdus-Salaam shared a home in Harlem. The two were married on June 25, 2016. The Rt. Rev. Mark M. Beckwith, Bishop of Newark, and the Rt. Rev. Gayle E. Harris, Bishop Suffragan of Massachusetts, co-officiated at the ceremony held at the Greater Newark Conservancy in the presence of a small group of family and close friends.

Rev. Gregory A. Jacobs has been a canon to the Ordinary and chief-of-staff at The Episcopal Diocese of Newark for less than a year.

According to the website, Greg has been with the diocese since September 2008, initially as Canon for Ministry Development, and as Canon to the Ordinary and Chief of Staff since 2009. His job is to assist and advise the Bishop in matters concerning congregations, clergy and staff.

For clergy, he manages transitions into congregations, recruits and deploys clergy, works with interim clergy, and provides guidance in their ministry development.

Though an investigation his wife’s death is currently ongoing, some reports suggest she might have taken her own life. The NY Top Court judge actually had a history with suicide after she lost both her mother and brother one after the other. In 2012, her 92-year-old mother committed suicide on Easter; two years later, her brother killed himself, close to the same holiday.

Rev. Gregory Jacobs –who reported Abdus-Salaam missing –told reporters he does not believe his wife committed suicde and is asking the public for help in the sudden death of his wife.