Carrah’s husband has extensive experience in both the private sector and public service.

He served as the Vice President of Strategy for the Texas Public Policy Foundation and previously served as Sen. Ted Cruz’s chief of staff when the Texas Republican led efforts that forced a government shutdown in 2013 over funding for the 2010 health care law. 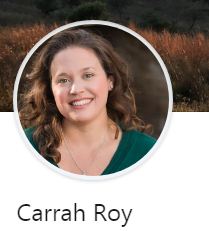 The two have been hitched for a number of years after meeting at the University of Texas. Since their nuptials, the two have welcomed two children together, a son Charlie and a daughter, Virginia.

According to her LinkedIn, the lovely wife and mom of two, is an ‘experienced attorney with real estate and real estate finance expertise’

Carrah studied political science at Texas A&M University and earned her J.D. Law from The University of Texas School of Law.

She was a policy coordinator for Bush-Cheney in 2004 and later worked for five years at Hogan & Hartson LLP. From 2010 until 2015, she was an associate at Spencer Stuart. Carrah Roy is currently the president and owner at Public Interest Strategies LLC –which she began in 2016.