Ruben Reyes is the proud husband of Democratic politician, Regina Romero -who has been elected as Tucson’s mayor.

Ruben’s wife becomes not only the first woman to serve as mayor of the state’s second-largest city but also the first Latina to hold the office since the 1870s, when Arizona was still a territory.

The Somerton, Arizona native is a graduated from the University of Arizona. Additionally she holds a certificate in state and local government from Harvard University.
Romero was first elected to the City Council in 2007. The democratic city councilwoman, is also the Latino outreach director for the Center for Biological Diversity. 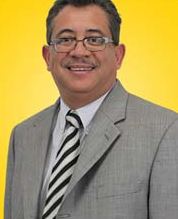 Regina has been married to husband Ruben Reyes since 2003. Together they are the parents of two children, 12-year-old Emiliano and 9-year-old Luciana.

53-year-old Rubén Reyes was born in San Luis, Rio Colorado, Sonora, but is a naturalized American citizen. He was born to immigrants from Durango -Ruben Sr. and Angelina Reyes.
His family worked in the fields in Somerton, Arizona, and Salinas, California. They followed the lettuce crops as migrant farm workers while his father worked and joined with Cesar Chavez and the United Farm Workers Union.

Rubén graduated from Arizona Western College and moved to Tucson in 1986 to attend the University of Arizona, where he graduated in 1988 in Radio/Television Production.
According to his LinkedIn, Reyes is a Senior District Advisor at U.S. House of Representatives. He’s worked at the U.S. House of Representatives for 16-years. Reyes is best known for being the district director in congressman, Raúl Grijalva’s Tucson office.
Prior to working with Grijalva, Ruben worked with the homeless at the Jackson Employment Center, with at risk students at Cholla High School, as a producer for Telemundo, and several radio stations.
Ruben Reyes is also into film making, in fact back in 2007 he made his fil debut. Reyes then called his first feature film, “Pancho Goes to College,” a Chicano version of “Animal House.”

When asked, ‘Is film a hobby or a career for you?’ Ruben Reyes said “For now it will be a hobby, I think. Another reason I made this film is I had something to say. Most independent filmmakers are not filmmakers by trade. You just have something to say and you use film as the way of saying it.”