Chrissy’s man is hitting the tabloids as his name came up during Tekashi69’s trial. 23-year-old 6ix9ine identified Jim Jones as a member of the Nine Trey Gangsta Bloods. He added that Jones is a retired rapper.

Born on July 15, 1976; Bronx native Jones began his entertainment career as a hype man before being taken seriously as an MC.
Bronx-based rapper who released the #1 single “We Fly High” in 2006. He is one of the CEO’s of Diplomat Records and his fifth studio album, Capo, was released in 2011. He is also a member of the rap groups Dipset and ByrdGang.

Jim who is the father of a son Joseph Guillermo Jones III, born in 2003 -has been in a romantic relationship with TV personality, Chrissy Lampkin for years. The two have been long associated as they appeared together on VH1’s Chrissy & Mr. Jones back in 2012. 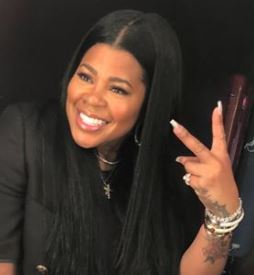 Lampkin was born April 27, 1971; she comes from Cuban and African-American descent. Though Chrissy is best known for being Jones’ woman, she made a name for herself on reality TV making her debut on Love & Hip Hop in 2011. At the time she was introduced on the show as Jim Jones’ fiancee. The couple appeared in the first and second season but reportedly quit the show due to what they deemed its “blaxpoitation”
Their relationship sparked the spin-off reality show Chrissy & Mr. Jones. Earlier this month reports surfaced of the couple returning to the “LHHNY” franchise.

Since then, her personality has made her accumulate over 1.8 million followers on her self-titled Instagram account. Chrissy who also goes as Chrissy Jones describes herself on social media as a WeTv Executive Producer. The 48-year-old also runs her own website.

Find her on Instargram here.