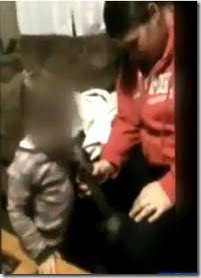 24-year-old Rachelle Braaten, from Centralia, WA, is under investigation for letting her 2-year-old son take a hit off her ********* bong.

A shocking cell phone video shows Braaten briefly putting a ********* bong into her son’s mouth. He coughs and people can be heard laughing.

Police confronted the child’s mother, and according to Komonews, she told the detectives:

“Well, it was like, you can’t see in the camera, but the person taking it, and then there was like a group of people there. And I guess it was a joke and a stupid mistake that wasn’t really funny.”

Braaten was arrested, facing charges of manufacture of ********* and delivery of a controlled substance to a minor. She said the child’s behavior did not change after the smoke and that he continued playing.

Cops also found ********* plants at the woman’s house. Braaten’s fiance and father of the child, 25-year-old Tyler Lee, said he smoked ********* for medicinal reasons, but confessed selling it to a dispensary. Lee said he wasn’t there when the kid took a hit but was arrested as well.

Lee was released Monday pending the filing of charges, while Braaten remains in jail, held on $5,000 bail.

When asked how she felt, Braaten responded:

The boy in the video, and his 5-year-old brother, are now in the care of child protective services.

Here is a little info about Rachelle Braaten. Braaten was born on October 16, 1988in Portland, Oregon, she graduated in 2007 from Astoria High School in Astoria, Oregon, worked at West Corporation before she found a job as a Supper Wal-Mart. According to her living boyfriend Tyler Lee they are currently engaged, they live in Centralia, Washington with her older son and their younger son.

Found Rachelle Braaten Lee as she calls herself on Facebook here and Tyler Lee is Here.