Emma Fairweather is the English woman who resulted injured after Prince Phillip crashed the car she was in.

Emma is spilling the beans on the car accident last week, in which 97 year-old Duke of Edinburgh’s Land Rover overturned, and she was left with a broken wrist.

The crash happened outside Queen Elizabeth’s Sandringham estate in Norfolk, where the royal family spends Christmas holidays. Philip’s 4X4 Land Rover somehow collided with a Kia car, in which Fairweather was riding.

Emma was traveling with her 28-year-old friend and her friend’s baby. She was in the passenger seat and told media it was only thanks to the good driving skills of her friend that the crash wasn’t even more serious. Emma was left with a broken wrist. As a result, Emma spent her 46th birthday on painkillers with her arm in a cast. 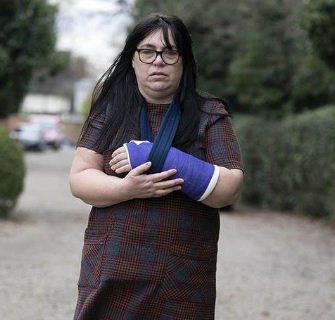 She appeared on national TV saying she’s upset that she still hasn’t received an apology from Prince Philip. In addition she also said at the time of the crash she was advised ‘not to speak to anyone’ –suggesting as English media puts it, ‘a royal cover-up.’

Fairweather described the traumatic moment when Duke’s Rover pulled out of a side road and hit them. She couldn’t stop screaming she said. She told the Mirror, “I’m lucky to be alive and he hasn’t even said sorry. “It has been such a traumatic and painful time and I would have expected more of the Royal Family. “It could have been so much worse.”

As for the Prince’s defense, he apparently told witnesses he had been dazzled by the sun. However, Emma recalls it being cloudy.

Emma Fairweather is from King’s Lynn, Norfolk. According to social media, she attended Sprowston High School.

She is a mother of two who lost her job and marriage broke down, all in the same year. With tears in her eyes she said she had a really bad year and then this happened; “I thought I’d at least have got a note and maybe some flowers but I’ve heard nothing. “The police haven’t given me any emotional support either.”