Ashlen Diaz is the ultra-private and otherwise unknown girlfriend of superstar, Post Malone.

Her insanely famous alleged beau was recently named, one of the most streamed artist of the 2010’s.
But you know what they say, behind every great man, there’s even a greater woman.
And for Malone, the first name that comes to mind is the stunning, Ashlen Diaz.

Whether they are currently together or not, they definitely have history, as Miss Diaz was there for him before he became the phenomenon he is today.

Here we’ll tell you everything you need to know about Ashlen Diaz and their story together. 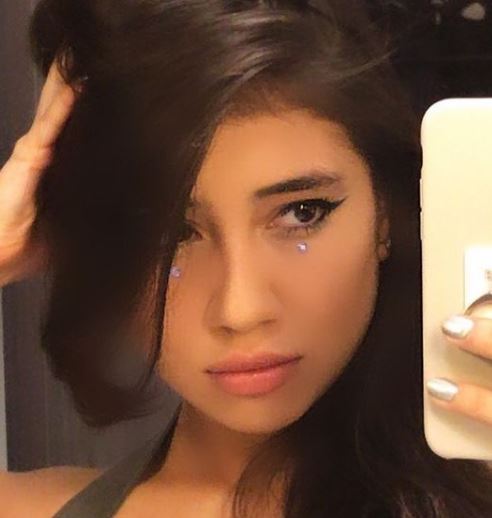 The two have been dating for a while, in fact, they have been romantically linked since 2015. And the pretty lady has been credited with being his biggest source of support on and off the stage.
The two are so tight that some sources say Ashlen Diaz is/was the inspiration behind his successful musical career.

What’s really unsettling is the fact that, they hardly ever appear together, however sources say the two are in a relationship.
While some don’t waste any time in telling the world about their significant others, that can’t be said about these two.

As for Diaz, while her man is doing his thing she is also keeping busy.

To talk about Ashlen Diaz, we first need to tell you about Post Malone.

He first gained recognition with his 2015 debut single “White Iverson.”
Since then, he has been known for a music style that blends elements from a wide range of genres, including hip hop, pop, country and rock.

His dad, Richard Post is described as his early mentor -who introduced him to multiples genres of music, having been a DJ in his youth. Posty was raised by his father and stepmother. 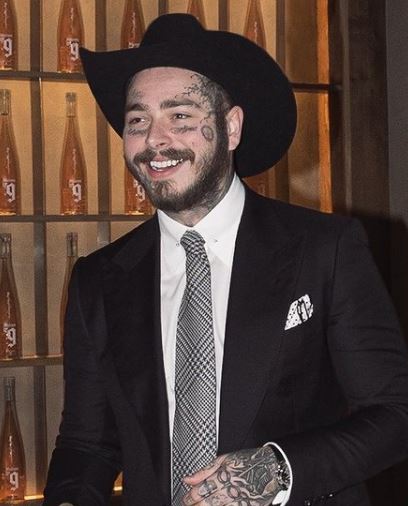 In his youth he began playing the guitar and was even in a heavy metal band.
Malone dropped out from Tarrant County College to pursue his music dreams. He released his first single White Iverson in 2015.
He signed a recording contract with Republic Records in August 2015. He released his first studio album “Stoney” in December of 2016.

The following year, Post released the first single from his second album, “Rockstar”, featuring 21 Savage; which peaked at number 1 on the Billboard Hot 100.

The album earned him four Grammy Awards nominations. His third studio album “Hollywood’s Bleeding” was released in September 2019 and debuted at number one on the Billboard 200.

The now rapper, singer, songwriter, guitarist and record producer; has also been involved in numerous collaborations with various artist.
Last summer he even released a line of rosé, Maison No. 9.

Malone was born Austin Richard Post on 4 July 1995; the Syracuse, New York native was raised in Grapevine, Texas -after his father took a job as the manager of concessions for the Dallas Cowboys.

Malone is easily recognizable. In addition to his talent, fortune and fame, the fella can’t be missed in public thanks in part to his tattoo work. 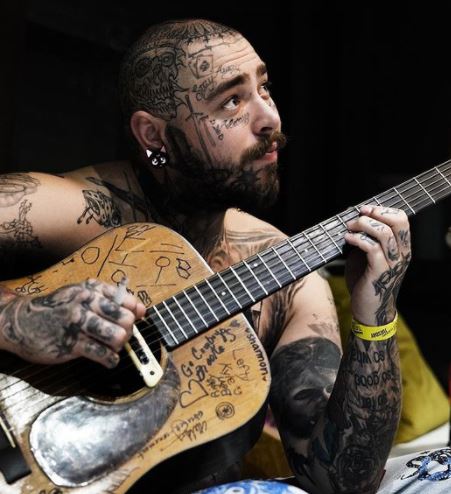 He is highly known for his bold personal style and his face tattoos are pretty much signature.
His ink work includes a large collection of face tattoos. In particular, a line of barbed wire across his forehead, the words “Stay Away” above his right eyebrow, “always” and “tired” under both eyes, and “STONEY” below his chin.

As a result, he’s been involved in controversy. A Couple of years ago he went on a rant against people who accuse him of “appropriating” African-American culture. He told GQ “there’s a struggle being a white rapper.”

Back in 2015, Malone dedicated a romantic tweet to her for her birthday, he wrote ‘happy Texas time birthday to most wonderful thing to ever happen to me Ashlen Nicole Diaz. 💖 I love u’

Since the two have kept their relationship pretty much under wraps, there’s been a lot of speculation about their current status.
In fact, Post Malone has been romantically linked to other women, making Malone seem as if he cheated on Diaz.

There’s some publications that report they have been broken up since 2018, while others claim they are still together.
It was in 2018, that Malone was accused of cheating on Diaz, after he was pictured relaxing in Saint-Tropez in the company of an unidentified female.

He was later linked to actress Lucy Hale after she confessed to have a crush on him. 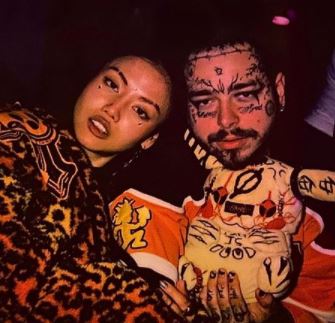 Most recently, in August of 2020, Malone was romantically linked to Korean Tiktok star, singer and rapper MLMA (pictured above).

She is a Makeup artist and a Fashion Designer as well. She has 1.3m followers on both TikTok and Instagram.

The rumor of a possible relationship started after MLMA -which stands for “Me Love Me A lot” made a TikTok video with a series of pictures of her hanging out with Post Malone.
The two haven’t confirmed nor denied the rumors, leaving the door open for many interpretations.

During happier times for Posty and Diaz, she was described by close sources as a ‘fixture’ in Post’s long tours. As a result of their work together and the support she obviously gave him, they would spend time together on the road.

How old is Ahlen Diaz Born December 19, 1995. She is believed to be a Texan beauty, unfortunately not mnay details about her family and early childhood are available.

She once revealed she prefers to stay out of the spotlight because she suffers from social anxiety disorder.

Some sources say she worked as a promoter at Cashaveli TX, for a few years. In fact, a theory about her link to Malone says it was thanks to her job that they first came together. It is believed she met Posty after she booked a show for him in Texas, Dallas.

She later developed her career working as a music promoter on her own.

She is currently an independent concert promoter in the Greater Los Angeles Area. 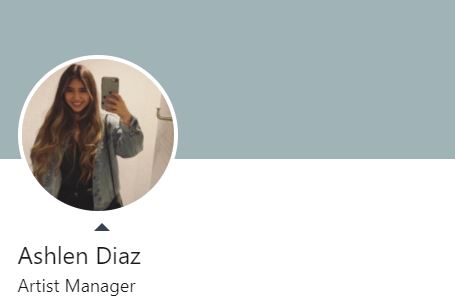 According to her LinkedIn, she calls herself an artist manager; and describes herself as ‘Experienced Promotions Specialist with a demonstrated history of working in the music industry. Skilled in Event Planning, Music, Marketing, Social Media Marketing, and Social media. ‘

As for her education, she apparently attended North Lake College in Dallas, where she studied Marketing.

According to online info, the young and talented music promoter is doing pretty well for herself and has a net worth of approximately $12 million.

Miss Diaz is also present on social media. Her preferred choice of social platform is IG. She is active on Instagram with the handle @ashcash.

With less than 100 posts, the brunette beauty has nearly 100k followers on IG.

There’s also a link on her Instagram page that leads to a website, ash-cash.com; which is currently under construction and says ‘coming soon.’