Marta Domingo is the longtime wife of world renowned Opera singer, Placido Domingo whose decades long career is being shadowed by accusations of harassment.

Marta’s famed husband has been point out recently by several women accusing the opera legend of misconduct. The accusations date back at least three decades. The 78-year-old becomes the latest in a series of #MeToo cases.

Placido who has a 50-year career is arguably the most famous living figure in classical music, the Spaniard has spent decades at the pinnacle of the world of opera. He currently serves as the Director of the Los Angeles Opera. The recent accusations may be hard to hear for his wife of nearly 60-years, Marta Domingo -a former singer turned stage director. Like her husband, she is a prominent figure in the opera business. 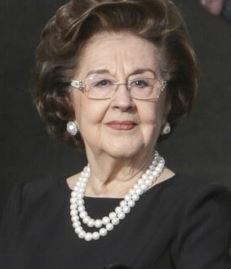 Marta Domingo was born in Mexico, Veracruz as Marta Ornelas in 1935. Marta who is also an opera figure, met Domingo while working together in her native Mexico. The two tied the knot in 1962 and welcomed two sons, Placido Jr. -and Alvaro Maurizio. Marta also became a stepmother to Jose Domingo -Placido’s son from his first marriage.

Marta who attended the National Conservatory of Music in Mexico City -led a successful career as an opera soprano, however she decided to retire from the stage to raise her family. Placido himself has credited Marta with sacrificing her career after getting pregnant with their first child. At the time of their nuptials, Placido was 21 and Marta was 26.

After her children had grown up, Marta who never thought on returning to her career as singer, focused on another passion, that of stagecraft and design. She debuted as director in 1991 with Samson et Dalila for CulturArte at the Teatro de la Opera in Puerto Rico. She subsequently directed Tosca for Seville’s La Maestranza Theater and The Barber of Seville in Puerto Rico.

Her credits include her acclaimed production of La Rondine -which was presented by the Bonn Opera, Washington National Opera, Warsaw Opera and LA Opera. She has directed two different productions of La Traviata. Other productions lead by Marta Domingo include Wolf-Ferrari’s Sly and The Tales of Hoffmann.

Marta’s 57-year marriage was until recently thought to be one of the most successful.