Romney, best known as the multimillionaire financier who was governor of Massachusetts from 2003 to 2007 and a Republican Presidential candidate in 2008 and 2012 -confirmed he was behind the account during a recent interview.
The revelation is particularly important since Romney is one of a few prominent Republicans to be critical of President Donald Trump’s actions on Ukraine that led House Democrats to open an impeachment inquiry.

The 72-year-old -who currently serves as a senator from Utah -was asked about the account during an interview -to which he replied in French, “‘C’est moi,'” or “it’s me.” 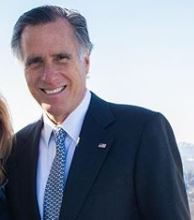 A Slate investigation linked the Pierre Delecto account to him and clues included Pierre Delecto ‘liking’ content tweeted out by Romney’s kids. Slate also noted that the account replied to several Romney-related tweets and liked some others that were critical of Trump and Republicans.

The Pierre Delecto account which now has a face -was used by Romney for a couple of reasons. Pierre Delecto’s tweets since 2011 offered mild criticisms of Donald Trump and perhaps most importantly the Mormon church elder used his own account to defend his real persona.
In one such tweet, Slate found, Romney responded defensively to a conservative blogger at The Washington Post who said Romney’s Trump strategy was “‘was non-confrontation verging on spinelessness.'”
“‘Jennifer, you need to take a breath,'” Pierre Delecto replied. “‘Maybe you can then acknowledge the people who agree with you in large measure even if not in every measure.'”

The account, which was created in July 2011, has now made its messages private. According to NBC News, the account was first revealed by Slate’s Ashley Feinberg, who was also responsible in 2017 for revealing former FBI Director James Comey’s anonymous account.