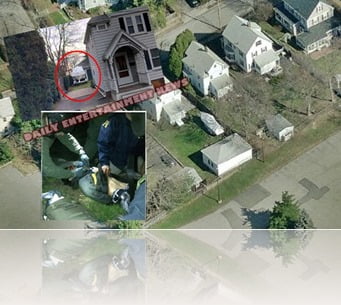 After a long and exhausting hunt for 19-year-old Dzhokhar A. Tsarnaev, aka Boston Bomber #2 we heard he has been capture, Dzhokhar was found by David Henneberry at his house in Franklin St. in Watertown, Massachusetts when he went to his back yard for a smoke when he notice the strap of the tarp was hanging, he approached carefully he lifted the cover and found a pool of blood and a person, Dzhokhar A. Tsarnaev hiding inside his boat wounded from the gunfire the night before where his brother Tamerlan was killed..

Mr. Henneberry  who lives with his wife Elizabeth fled back to his house and called 911, when police arrived Dzhokhar began to exchanged gunfire with police while holed up in a boat, he was taken into custody, in an ambulance to treat him for serious injuries, however none were specified. This how the events began on Thursday evening when police released photos of the Boston Suspects, later identified as brothers Tarmelan Tsarnaev  and Dzhokhar A. Tsarnaev. Tarmelan was killed, his younger brother who ran over his older brother’ body when he made his  getaway in an SUV. The photo of Tamerlan Tsarnaev dead body has been leaked by several sources, he was seen shirtless, blood covering his face, he had his eyes and mouth open, multiple gunshot wounds were found on his chest where there also were two gashes, one was a huge open gash that spans from the center of his chest to his back and just below that a smaller gash. 1- 5:10 P.M. The FBI releases video and images of the two suspects, who turn out to be Tamerlan and Dzhokhar Tsarnaev. 2- 10:20 P.M. Reports of gunshots on MIT campus in Cambridge, followed 10 minutes later by the discovery of slain campus police officer Sean Collier, 26. He was shot in an apparent confrontation with the bombers. 3- ABOUT 10:30 P.M. The suspects’ carjack a Mercedes SUV in Cambridge. The carjackers hold the SUV’s driver for about a half-hour, then let him go, unharmed, at a gas station. 4- ABOUT 11:30 P.M. Cops follow the carjackers on a wild, eight-mile chase to Watertown, dodging explosive devices thrown from the vehicle and exchanging gunfire. Tamerlan Tsarnaev is critically wounded in the firefight and pronounced dead. Transit police officer Richard Donohue is also injured in the gun battle. 7- 8 A.M. Boston’s police commissioner tells residents to stay inside and lock their doors.

8- 10:20 A.M. Authorities say a gray Honda believed to be linked to Dzhokhar Tsarnaev was recovered in Boston.

9- 10:35 A.M. University of Massachusetts Dartmouth officials confirm Dzhokhar Tsarnaev is a student there. They close the campus and order an evacuation “out of an abundance of caution.” 10- 8:45 P.M. Cops surround boat in backyard of house in Watertown and take Dzhokhar Tsarnaev into custody. Tsarnaev reportedly lost significant amounts of blood after suffering two wounds. One was a gunshot to the leg he sustained during a running gun battle with police early Friday. Another was the wound to his neck.

CBS News correspondent John Miller reports: ‘They say it appears from the wound that he might have stuck a gun in his mouth, and fired and actually just went out the back of his neck without killing him.

‘That’s one of the reasons he’s unable to communicate, but he can understand what they’re saying. And they believe there will be a point where he will be able to talk to him.’

Law enforcement sources told media that Tamerlan and Dzhokhar Tsarnaev were determined not to be taken alive.

Dzhokhar was also responsible for driving over his brother as he was being handcuffed by police following a fierce gun battle in Watertown in the predawn hours of Friday.

The teen Tsarnaev floored a stolen Mercedes SUV and drove it straight at the police and his 26-year-old brother who was on the ground after being seized.

The police were able to jump out of the way – but Tamlerlan was dragged for up to 40 feet under the wheels of the speeding car. The crush injuries are thought to have contributed to his death but police have yet to reveal an exact cause of death.

‘These guys did not have an exit plan after the bombing, and from they way they have both ended up it looks like they planned on never being taken alive,’ said a law enforcement source.

‘Why else would this kid drive over his brother. It does not make any sense until you realize he also tried to take his own life. They had some sort of suicide pact worked out so they would not be taken alive.’


Exactly what happened in the boat remains unclear. Neighbors reported hearing police SWAT officers unleash several bursts of automatic weapons fire as they closed in on the 25-foot vessel.


A police robot tore open the cover of the boat and a state police helicopter used an infrared camera to reveal Tsarnaev’s location in the stern. Officers lobbed flash grenades into the boat in attempt to stun the suspect and called from him to surrender. He later climbed out of the boat and surrendered. After he was taken into custody, he was rushed to the hospital.

Dzhokhar Tsarnaev is responding sporadically in writing to questions from investigators regarding other cell members and other unexploded bombs, law enforcement sources told ABC News.


The 19-year-old shoved his pistol in his own mouth and pulled the trigger as SWAT officers and federal agents closed in on the boat where he was hiding on Friday night. However, instead of killing him, the bullet simply tore through his neck.

Authorities initially said they couldn’t question him because of the throat wound. CNN reports earlier today that Tsarnaev was ‘intubated and sedated’ at a Boston hospital.

The Boston police commissioner said Tsarnaev is in ‘critical but stable’ condition on Sunday – which appears to be a downgrade from reports earlier this weekend that his condition was only ‘serious.’


Boston Mayor Tom Menino feared that federal agents never be able to interview Tsarnaev but it seems that investigators may already be making progress.