Philip John May is the husband of Home Secretary, Theresa May. His wife has announced her campaign to replace David Cameron as leader of the Conservative Party and Prime Minister.

Philip John May’s wife along with Boris Johnson were believed to be the two top contenders to replace Cameron –who will step down from the top job in October.

Philip May’s wife is Britain’s longest-serving Home Secretary having been appointed to the job in May 2010. Theresa Mary May (née Brasier)  was born on October 1st 1956 in Eastbourne. She May went on to study geography at the University of Oxford, according to her bio.

Theresa has been involved in politics at all levels for many years. She served as a councillor in the London Borough of Merton from 1986 to 1994. She was also Chairman of Education between 1988 and 1990 and Deputy Group Leader and Housing Spokesman between 1992 and 1994.

Theresa was elected Member of Parliament for Maidenhead in May 1997.

She has held several positions within Parliament since 1997. She was a member of the Shadow Cabinet from 1999 to 2010, including as Shadow Secretary of State for Education and Employment, Shadow Secretary of State for Work and Pensions, and Shadow Leader of the House of Commons. From 2002 to 2003 she was the first female Chairman of the Conservative Party. Mrs. May was also Minister for Women & Equalities from 2010 to 2012.

Prior to becoming an MP, Theresa May worked at the Bank of England and Association for Payment Clearing Services (APACS). 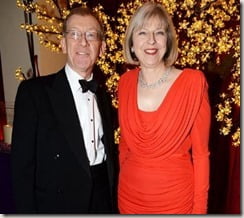 Philip John May is Theresa May’s long time husband. The couple has been married since 1980 and have no children.

Philip John May, a banker, has faced controversy in the past. Rumors surfaced he had owned shares or had a major executive position at G4S. The international security firm denied it.

He is currently listed as a Relationship Manager at Capital Group, a position he has held since 2005, according to his LinkedIn.

He previously served as a fund manager at de Zoete & Bevan from 1979 to 1983 and Prudential Portfolio Managers UK from 1983 to 2000 and Deutsche Asset Management UK from 2000 to 2005. He has a Master of Arts degree from Oxford in Modern History.

Philip John May and Theresa met while attending University of Oxford during a Conservative Party student disco. The two were introduced by Benazir Bhutto, later the prime minister of Pakistan.

Though is not clear why the couple didn’t have any children she has said in past interviews she feels a sense of loss and that things just turned out as they did.

On their free time, Philip John May and wife enjoy attending cricket matches. The couple are members of the Church of England and assist regularly.