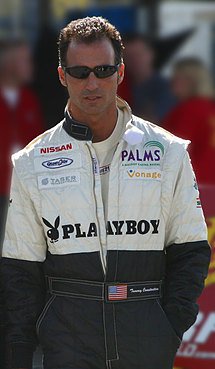 Phil Kenner who was still trying to solicit money from unwary NHL players and others and Tommy Constantine who was sued by Phil recently, were both arraigned in Phoenix, Arizona charged with at least ten counts of conspiring to steal 15 million dollars from NHL players and several Long Island police and their families. They will be transported to New York, where they will face another arraignment in the federal courthouse in Central Islip.

Let’s take a closer look at these guys.

Tommy Constatine is a retired race car driver. He founded the Playboy Racing Club and is friends with Hefner. In an interview in July of this year, Kenner revealed that Tommy is a convicted drug dealer. He is also the owner of a prepaid credit card business called Eufora. He was engaged to Sarah Bowers.

Phil Jenner, 44, a one-time financial advisor to former Rangers great Mark Messier and the pop group ‘N Sync, calls himself a lifestyle coach. He was arrested yesterday at his gym. He made his connections through a college friend who was drafted to the league after school. Between 2002 and 2013, it is alleged that Kenner talked 13 NHL clients to invest on a project in Hawaii that never existed!

It is further said that between February of 2008 and May of 2009 these two teamed up to convince the same NHL clients to invest over $15 million in Constantine’s credit card company.

Multiple charges have been brought against them including wire fraud, wire fraud conspiracy and money laundering conspiracy. They each face up to 20 years in prison if convicted. No statement has been made by them or their lawyers.

Congrats to the men and women who conducted this investigation, in particular to former Ranger and Islander Brian Berard (also a victim)  and  former New York and Long Island police officer John Kaiser (a victim too), along with FBI agent Matt Galioto