Michelle Eileen McNamara is the late wife of stand-up comedian and TV actor, Patton Oswalt. The couple was married for 10-years prior to her death.

Oswalt’s wife Michelle –a true crime writer and journalist, unfortunately, died unexpectedly in her sleep in April 2016. She was 46-years-old. An autopsy found that she had an undiagnosed heart condition and had taken a mix of prescription drugs, including Adderall, the pain narcotic fentanyl and the anti-anxiety medication Xanax.

During their marriage the couple welcomed one daughter, Alice Rigney Oswalt who was born in 2009. Since her death, Patton remarried to actress Meredith Salenger. He tied the knot on November 2017, seven months after McNamara’s first year anniversary.

Michelle Eileen McNamara was born April 14, 1970; she grew up in Oak Park and River Forest. One of six children born to Rita Rigney McNamara, and Thomas W. McNamara. 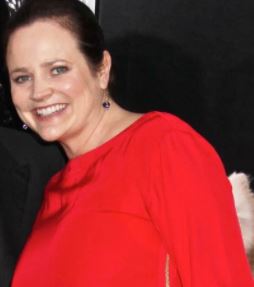 While attending River Forest High School, she worked on the school newspaper, The Trapeze.

McNamara showed an interest in writing from an early age keeping journals, writing essays and poetry.

She did her undergrad studies at the University of Notre Dame and went onto study at the University of Minnesota where she earned a Master’s degree in Creative Writing. Following her graduation she moved to Los Angeles and during the early days of her career, focused on screenplays for film and television.

The true-crime author, McNamara was also able to shed light on a few unsolved murders in America. She was an interviewee for the TV series documentary A Crime to Remember. She also founded the website TrueCrimeDiary.

McNamara is perhaps mostly known for her obsession with the Golden State Killer case. In fact, she spent the final years of her life chasing the after him, hoping to identify him in her book.

At the time of her death, McNamara had been working on her nonfiction book on the Golden State Killer and was left unfinished. Patton finished the book using McNamara’s handwritten notes and the roughly 3,500 files on her computer. “I’ll Be Gone in the Dark” –was released earlier this year.